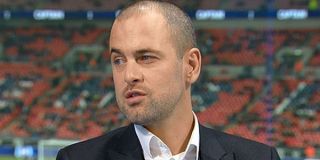 Joe Cole says Arsenal’s struggle to find the right captain is because of a cultural problem at the club.

The Gunners need a new man to wear the armband permanently after stripping Pierre-Emerick Aubameyang of it recently.

The Gabon star only replaced Granit Xhaka as the club’s captain during the 2019/2020 season.

Fans had expected him to do better than his predecessor, but his lack of discipline has seen him lose the position.

Arsenal needs to take its time and pick the right man this time, but it is not an easy task because most of the current players at the club are new.

Former Chelsea man, Cole, was asked what he thought the problem was, and he replied via The Daily Mail:

‘I used to go to Highbury and there would be a fear-factor with great leaders on the pitch but that slowly has been eroded. It was because of lack of leadership on that pitch.’

When Mikel Arteta came to the club, he constantly preached the need to change the culture at the Emirates.

We can see he is hard at work trying to make that happen. His decision to strip Aubameyang of the club’s captaincy shows no one will be spared if they cannot meet the disciplinary demands.

Hopefully, his treatment of the former Borussia Dortmund striker would serve as a lesson to others within the squad.