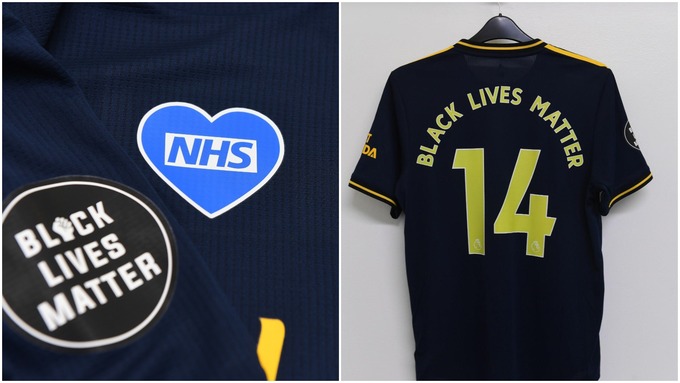 ‘it’s an honour’: Aubameyang donates his BLM shirt to Museum of London

Pierre-Emerick Aubameyang is donating his Arsenal shirt to the London History Museum, as part of a collection which will remember the Black Lives Matter protests and Coronavirus pandemic.

All Premier League clubs agreed to don the BLM logo on their shirts after a series of unnecessary deaths in America on black people, with the death of George Floyd the latest to be caught on camera, highlighting the issue.

This horrific piece of footage caused mass outrage, and demands for justice, and protests erupted around the world, despite an ongoing pandemic.

Aubameyang has been asked to donate his shirt to the museum, and he happily agreed to the idea, admitting that it is an ‘honour’.

“I am proud to be the latest black player to captain Arsenal and it’s an honour to have the opportunity to donate my Black Lives Matter shirt to the Museum of London’s Collecting COVID project,” said Aubameyang (via the Standard).

“I hope this will be remembered as the moment that football stood against all forms of racism and that it will inspire young people for the future.”

Foteini Aravani, Digital Curator at the Museum of London, added: “This jersey, part of Arsenal’s Black Lives Matter tribute kit, will be a very important addition to the growing number of objects the Museum of London is acquiring as part of our Collecting COVID project.

“This contemporary collecting builds upon the Museum’s rich collection of protest and activism, from the Suffragettes to the Brixton Riots and from the Brian Haw collection to Occupy London. Aubameyang’s jersey will join these items to act as an important reflection and response to Black Lives Matter as a movement and its resonance through London and its people.”

The BLM movement has drawn plenty of attention in recent months, and long may it continue.