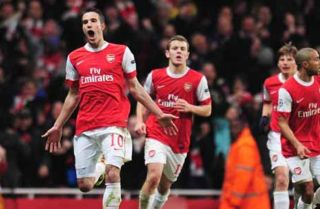 Us Gooners have had to put up with a lot of disappointing player sales down the years, with so many of our stars, such as Thierry Henry and Cesc Fabregas, leaving for Barcelona.

Some of the most disappointing sags, however, have been when our heroes have gone on to play for one of our Premier League rivals, and Van Persie’s move to Manchester United in 2012 is perhaps the most controversial of the lot.

The Dutchman had been a world class performer in his final two seasons at the Emirates Stadium, and became a real leader for us as he was named club captain.

Wilshere speaks for all of us when he says it was a real blow to see such a top player join a rival just when it felt like we were making some progress.

“When Robin van Persie left, yeah, I was devastated,” Wilshere is quoted by the Metro.

“I think he had just scored 30 goals the season before and he was our captain, he was massive.

“Especially when he went to United. It was like, ‘argh’. We’d challenged the year before, then we had a little bit of a blip, then it felt like RVP was firing, he was the captain, we were just about to challenge again.

“Then all of a sudden he left and went to one of our biggest rivals. It was difficult to take.

“I’d experienced that before so I knew we’d bounce back. I was there when Fabregas left, Nasri left, big players for us who would have helped us challenge and almost feels like if we kept that team together for a few more years I think we would have went on to win the Premier League, then who knows where you go from there.”