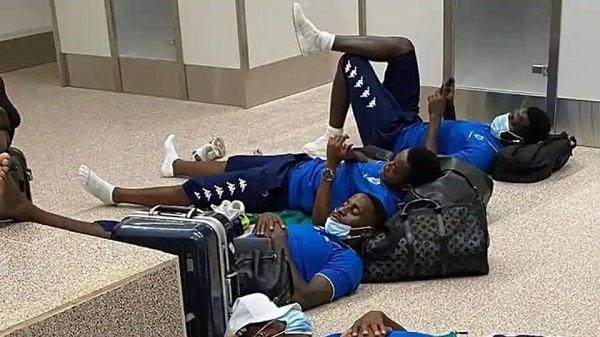 Journalist predicts what Arteta might think about Aubameyang’s latest predicament

Pierre-Emerick Aubameyang posted an image on social media yesterday about him and his Gabon teammates being forced to sleep on the floor at a Gambian airport in Banjul.

Gabon is visiting the African nation in preparation for the Nations Cup qualifying match.

The international break gave players the chance to represent their countries and Aubameyang will have been happy to represent Gabon once again.

But this treatment by their opponents will not be good memories for him to look back on.

Clubs always want the best for their players when they send them out with their countries, and Arsenal will be no different.

Speculating what Arteta’s response will be when he sees the post made by Aubameyang, Charles Watts claims that the Spaniard will certainly not be happy.

He said as quoted by Thisisfutbol: “Mikel Arteta will be looking at that and thinking, ‘oh my god, our captain, our top scorer at the end of the season, has been spending the entire night on the floor of the airport getting no sleep and now he’s got to play for his country in ten hours’ time.’ Arsenal certainly won’t be happy with the situation.”

Aubameyang has suffered for poor form in front of goal for much of this season and the national team assignment will help him forget about Arsenal’s 3-0 loss at home to Aston Villa before the break.

However, fans will hope that he returns with his scoring boots when the international break is over.