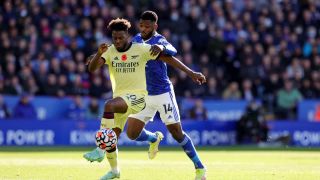 Arsenal had a brilliant afternoon with several of their players impressing in a 2-0 win over Leicester City.

The win was the 9th consecutive game they have played without a defeat and moves them up to fifth on the league table before other clubs play their match.

While the likes Aaron Ramsdale, Bukayo Saka and Gabriel Magalhaes stole the show with their performances, The Evening Standard’s Simon Collings focused on Nuno Tavares.

The summer signing from Benfica deputised at left-back for Kieran Tierney again, and he did well.

Tierney has been one of the most important players at Arsenal and the Gunners previously struggled in his absence.

However, Arsenal has won their last two league matches with Tavares playing and the team still looks balanced.

Collings is happy that there is a player who can fill in for the former Celtic man and it wouldn’t look like Arsenal is in a crisis.

He admits it is still early days, but insists Tavares has made a fine start to life at the Emirates.

He tweeted: “Early days, but it is nice to feel like it isn’t a crisis now for Arsenal when Tierney isn’t fit.

Finding a suitable cover for Tierney has been tough. If Tavares continues getting better, Arsenal would have solved the left-back problem at the club for the long term.

Arteta explains why he didn’t drop Tavares against Newcastle
1 December 2021, 17:02