Sead Kolasinac, Arsenal’s first summer signing from Bundesliga side Schalke, is a huge upgrade on current left-backs Nacho Monreal and Kieran Gibbs, statistics show. The Bosnia-Herzegovina defender came through the Schalke youth ranks, making more than 100 appearances for the Budesliga club. He will join Arsenal on a free transfer on 1 July after his contract expires.

Our friends at Oulala.com have taken a look at how Kolasinac measured up to Monreal and Gibbs in six key areas on a per game basis last season.

Covering both defensive and offensive performance, our analysis suggests that the 23-year-old will slot straight into Arsene Wenger’s starting XI ahead of the Arsenal duo based on statistics from the Bundesliga and Premier League. 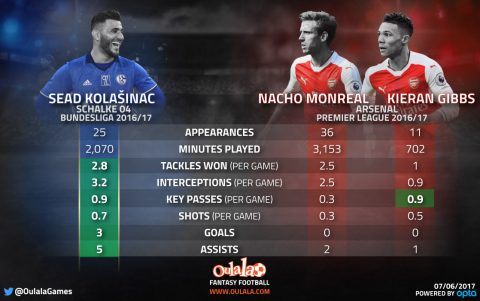 With age on his side too, it appears Arsene Wenger’s first signing is the perfect start to the rebuilding job he faces in turning Arsenal back into genuine title contenders.