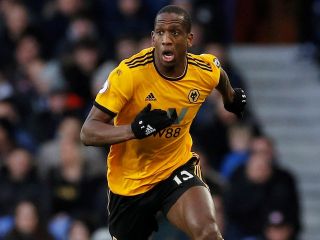 Willy Boly has moved to rubbish any talk of him quitting Wolves to join Arsenal this summer.

The defender has been highly impressive this season, and with only 12 months remaining on his current deal, there was always going to be some speculation surrounding his future.

On a live Q&A session with Bein Sports on Instagram, the 29 year-old was asked if he would consider a switch to Arsenal this summer, to which he replied: ‘No, never’

“Arsenal is a very good team – everybody can see that. But, on paper, (Wolves) are not afraid of Arsenal. If Arsenal are coming here on a Saturday, I don’t think Arsenal are thinking they are going to win easily.

Boly has every right to be confident of his side’s chances against us this weekend, with his team proving to be amongst the most consistent and powerful this season, including going deep in the Europa League also.

His side are in with a chance of qualifying for the Champions League for next term, either via winning the EL in August, or by finishing inside the top five, with Manchester City’s Europe ban currently hanging over their heads.

Could Boly change his mind once the season is over?