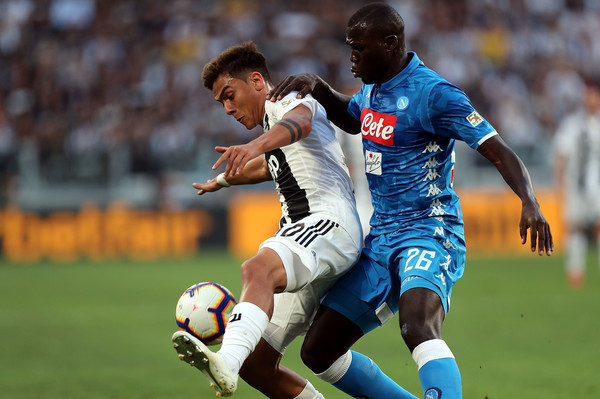 Arsenal shouldn’t see Koulibaly transfer as beyond them…

In as much as you can predict anything in football or indeed the world at the moment, it seems likely Arsenal will at some point dip into the transfer market and make a significant investment in central defence.

We’ve been linked with Dayot Upamecano by football.london, among others, while Sky Sports list as being among the suitors for another promising youngster Evan N’Dicka.

Of course, we also have the benefit of exciting youngster William Saliba returning from loan at Saint-Etienne, while Pablo Mari’s impressive start to life on loan at the Emirates Stadium could yet earn him a permanent move.

However, that does not mean we can afford to be complacent, and that we shouldn’t still see ourselves as entitled to battle it out with the best, for the best.

Kalidou Koulibaly is certainly up there with the very finest in the world in his position after years of rock-solid displays for Napoli, and the Daily Mirror claim he could be available for £80million this summer as his club seem resigned to having to sell.

That report focuses on Manchester United’s prospects of landing Koulibaly, but Arsenal’s need for a top centre-back is arguably greater. In David Luiz, Sokratis Papastathopoulos and Shkodran Mustafi we have three senior players in that position who need replacing pretty sharpish. Two of those are on the wrong side of 30, and the other is, well, Mustafi. The Germany international may have improved this season but from a pretty low point that surely means he’s not a reliable enough option for the long run. Not so long ago, a report from Il Mattino, as translated by the Express, linked us as one of the teams in for him.

We made a statement last summer by splashing out on Nicolas Pepe, and there’s no reason we couldn’t do so again with Koulibaly. Of course, we will have to see how the coronavirus crisis plays out, but the Telegraph report that the aim is to restart the Premier League on June 1st, get it done quickly, and then get next season going by August. It would be foolish to assume this is definitely achievable, but if it can be done, it should hopefully go some way to limiting the financial damage done to us and other clubs.

If we can go just that bit higher than we did with our club-record purchase of Pepe (fee via BBC Sport), then Koulibaly could be ours, and there’s surely every reason we could persuade him to pick the Emirates over Old Trafford.

Firstly, don’t underestimate the lure of living in London for the very top players – it’s seen some surprisingly big names wind up at Spurs and West Ham in the past and we’re still a far bigger name than either of them!

Secondly, Koulibaly would be the undisputed star of our defence if he joined, whereas Man Utd already have Harry Maguire, and decent options alongside him in the form of either Victor Lindelof or Eric Bailly, plus possibly a revitalised Chris Smalling if he returns from his loan at Roma.

That’s not to say Koulibaly wouldn’t be an automatic starter at United, he almost definitely would be, but players like to feel wanted and needed, and you’d hope we could make a more convincing pitch in that sense.

Few people expected us to win the race for Sol Campbell when we did, and we’ve caused surprises in the transfer market in more recent times as well with Mesut Ozil and Pepe. We can, and must, try to do it again with Koulibaly.