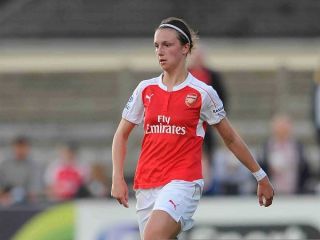 Ladies new signing says she is “a Gooner through and through”

Arsenal in the blood! by Shenel

Arsenal women’s latest signing Lotte Wubben-Moy cannot stress enough that she is Arsenal through and through with it running through her veins.

She is only 21 but growing up in North London she managed to progress and make her way through our academy system before making her first-team debut against Notts County in 2015 and after returning back to her childhood club after three years away at the University of North Carolina, Wubben-Moy is excited to get going again and said as much when she took time out to speak to the Arsenal website: “I mean this is a dream. I was talking with my parents a while ago and we were just thinking back to the time my auntie was singing the Arsenal chants to me while I was a baby in my cot. It definitely started off early and I’m delighted to be able to carry that through and say that I’m officially a Gooner – and a professional one at that, which is amazing.”

Lotte’s love for Arsenal would even begin early hours of the morning at times. She stated she would go from: “Waking up at 7am to watch Arsenal Premier League games in my dorm room to checking the feed on Twitter, it’s always been part of me and part of my life even out in the States. Definitely unfinished business.”

It is always a proud moment to see home grown talent, and players playing for their beloved childhood clubs whether that be as fans, family members or just for the players themselves.

And this is not any different for Lotte as she also said: “I’m a London girl and a Gooner through and through so to be able to return to this club is unbelievable.”

The moral of this interview is when you have kids, get singing the old Arsenal chants to them even when they are in the womb so when they come out, they quite literally have Arsenal in their hearts, minds and blood. Because let’s be honest, we can never have enough players or fans with Arsenal in their blood can we. Gooners?