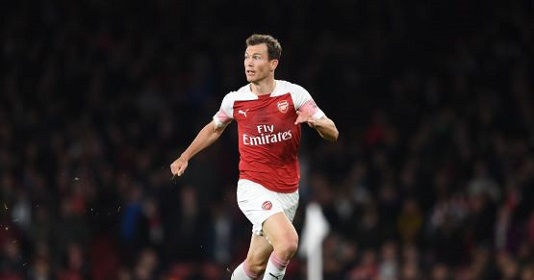 The ex-Juventus right-back Stephan Lichtsteiner joined Arsenal as a backup to Hector Bellerin, but after a promising start he seemed to be unable to keep up with the pace of the Premier League, and even when Bellerin got a long-term injury the Swiss could not hold down a place in Arsenal first team.

Although he came on a free transfer with a year contract, there was also an option for the Gunners to extend the deal for another year. It now seems clear that he will not be with us next season, and he has announced on Instagram that he was very disappointed with our end to the season…..

Dear Gunners We were close to add an important chapter to this amazing club’s history. But to be close … is unfortunately not good enough. This is hard to accept. I’m very disappointed. It was our objective to bring Arsenal back on the highest international level and to win trophies. Both belong to this great club. I wish my teammates, my coach and his staff, all hard-working employees and all Gunner fans simply the best! I’m confident our team can complete our mission next season! I loved to be a part of this club. It was a great challenge and experience without a happy end, unfortunately. Thank you very much for your overwhelming support! It was much appreciated! See you Stephan #COYG #WeAreTheArsenal #YaGunnersYa #ThankYou

A post shared by Stephan Lichtsteiner (@stephanlichtsteiner) on Jun 3, 2019 at 5:29am PDT

Good luck in the future Stephan