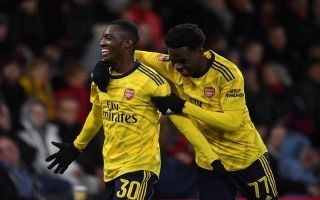 England legend Gary Lineker was full of praise for Arsenal ace Bukayo Saka after the youngster’s assist vs Everton.

The former Tottenham Hotspur star branded the makeshift left-back as a ‘very exciting young talent’ with his reaction to Saka’s assist during yesterday’s game.

The versatile ace’s dangerous cross into the box left Nketiah with the perfect opportunity to equalise for the Gunners.

Wonderful cross from the very exciting young talent that is Bukayo Saka. Expertly finished too by Eddie Nketiah.

Read More: The Arteta factor can have a great effect on Arsenal’s end of season.

Saka has now provided 10 assists in 27 appearances across all competitions for Arsenal this season.

The 18-year-old has been phenomenal since being tasked with covering the left-back position following injuries to Sead Kolasinac and Kieran Tierney.

It wouldn’t be surprising to see the youngster fast-tracked through the England ranks following a run of impressive performances.

Saka is quickly establishing himself as an important first-team player for the Gunners.