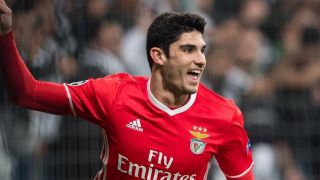 Arsenal is interested in a move for Gonçalo Guedes, but they now face competition from Liverpool.

Reports have linked the Valencia man with a move to the Premier League several times before now and Arsenal was looking to bring him to the competition, according to Todofichajes.

However, the Gunners will now have to beat high-flying Liverpool to his signature as the Reds look to make him their next top star.

Liverpool has some of the best players in the Premier League, but the report claims they still want to strengthen their squad and see Guedes as one player who can improve them.

He has started this campaign brightly, but the report insists he will unlikely remain a Valencia player by the summer and a winter move is possible.

The Spanish club needs money and they believe they can get good value from selling him to a top European club.

It remains unclear how much Arsenal will pay for him, but the report says Liverpool will part with €30M to sign him.

With his contract expiring in 2023, Valencia is likely to accept that offer and it is left for Arsenal to match or exceed it if they are serious about signing him.