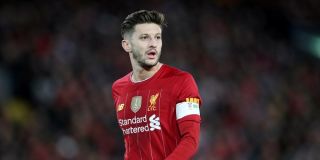 Arsenal will suffer a major blow in their bid to sign Adam Lallana from Liverpool if the coronavirus crisis continues beyond the summer.

Lallana is set to leave Liverpool in the summer as his contract comes to an end, Arsenal is one of the teams linked with a move for the former Southampton man and Mikel Arteta is reportedly keen for him to bring his experience to the Emirates.

However, with the Premier League suspended due to the coronavirus crisis, if the authorities that be decide that this season must be completed after this pandemic has ended, then clubs would have to renegotiate deals for their soon to be free agents.

Liverpool boss has been impressed by the form of Lallana this season but he has decided not to renew his contract so that he can leave space in the squad for players like Takashi Minamino.

Express sports claims that even though the club accepts that the player can leave in the summer, they still consider him a big part of their squad and success this season and they would be offering him a rolling contract pending when the season is eventually finished.

Lallana has struggled with his fitness in the past, but he has made 22 appearances for the Reds this season and his experience winning the Champions League and Premier League would help the Arsenal dressing room.