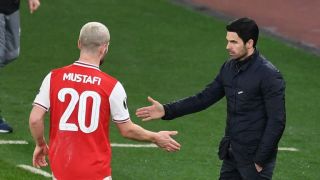 Liverpool turn down Mustafi transfer in favour of local lad

So Deadline Day has arrived and it looks ike it will be a much quieter one than we are used to with most clubs being cash-strapped due to the coronavirus pandemic. Most moves happening today will be loan deals or cheap purchases due to contracts running down.

One player Arsenal fans expected to see leave today is Shkodran Mustafi, who has been frozen out of the Arsenal team this season by Mikel Arteta, and it seemed likely that he could have been moving up North to Jurgen Klopp’s Liverpool. The Reds have lost most of their defenders to injury and with just six months left on Mustafi’s contract he seemed like a prime target.

But it has been revealed today that Liverpool have decided instead to go for Ben Davies from Preston, according to ESPN.

The 25 year-old is match-fit having played 19 games in the Championship this season and has spent his whole career at Preston, having arrived from just up the road in Barrow in Furness.

Like Mustafi, he only has six months left on his contract so comes very cheaply, and the deal includes the Anfield youngster Sepp van den Berg, 19, moving to Preston on loan until the summer.

I am sure that Mustafi will also have been talking to other clubs, so he may still be on his way out from Arsenal at some point today…