Dear Santa, this Christmas I wish for a new manager! by Konstantin Mitov

It’s really difficult, fellow Arsenal fans. There isn’t much to say about that which doesn’t exist – like our style of play. Honestly, at this point, I’d prefer watching paint dry, than Arsenal. Why on earth did I turn on the TV for the second half? Am I just like Arsenal, never learning my lesson?

You can try and have sympathy with Arteta, because their second goal came from flappy hands from Runarsson, but who picked him? A one-million-pound keeper against the second-best team in England. Surely Arteta was asked if Leno or Martinez would’ve been number one, and he chose to cash in on the better keeper.

At this point sticking with Arteta is just plain stupid. His decision making is terrible from the starting 11 to the substitutions and the half time talks, because we can’t seem to go out after the break with any purpose. But the decision to risk Martinelli’s health today was the icing on the cake. We didn’t take him off, because he is one of the very few players with energy, who can actually create something. This move showed lack of belief in the other players to deliver. It risked the player’s health and showed weakness. 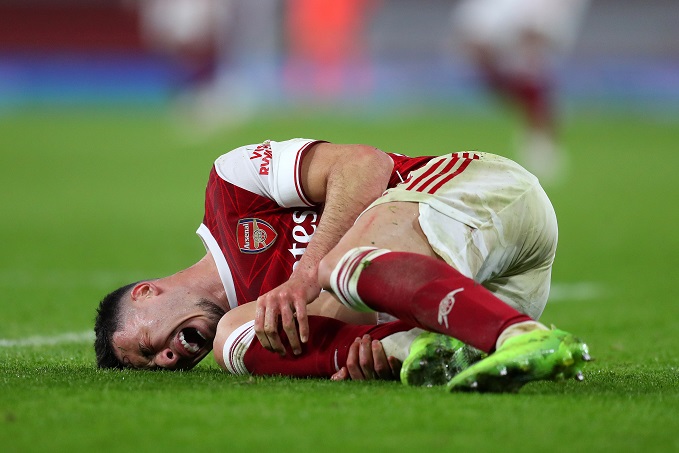 LONDON, ENGLAND – DECEMBER 22: Gabriel Martinelli of Arsenal goes down injured during the Carabao Cup Quarter Final match between Arsenal and Manchester City at Emirates Stadium on December 22, 2020 in London, England. The match will be played without fans, behind closed doors as a Covid-19 precaution. (Photo by Catherine Ivill/Getty Images)

What do you think if you are a player on that bench and you can’t come in for an obviously injured player? Arteta’s man management is extremely poor and when your job title says “manager” that is as important as coaching if not more. This is by far not the first example of poor decisions though. We’ve been playing Willian week in, week out in the league even though he’s been atrocious.

What about Laca, who scored 3 goals in the first 3 games and one miss at Liverpool got him benched and made him second fiddle to Eddie? Great way to support a 50-million-pound striker. I look at the players and I see glimpses of what they can do, but it’s like an invisible force is stopping them from playing what they actually can. Are they top 4 material, probably not, but they are better than 15th place of that I’m sure?

Mikel can talk about fine margins, but there is nothing to compare again. The best team, with the more shots and better chances won comfortably 4-1 at our ground. For as bad as Emery was, he never went on to be beaten by the likes of Burnley at home.

You must have a serious fountain that pumps up optimism cocktails to think that we’re going to get a result playing Chelsea next weekend. What backing will be enough in January? We need like 5 out-field players at least and a keeper if we think of sticking with Arteta, and we couldn’t even sign Szoszoblai. At this point, I’m not sure signing Messi would make a difference. There is Zero chemistry up front and a lack of transition from midfield to attack.

We can’t even keep the ball from a throw in. Our players don’t know how to find space. You would think a coach so lauded would teach the players such things, right? We really need a Christmas miracle to get a new manager, but if we do… Oh my God, I’m going to scream like I just got a new Nintendo 64!

I doubt this will happen right now though, after all this is Arsenal where actions are taken always too late, but I must dream of something to keep my spirits up. Hopefully, you have something going for you, because Arsenal is the most depressing it’s ever been, and the last few year’s haven’t exactly been easy. That says something.