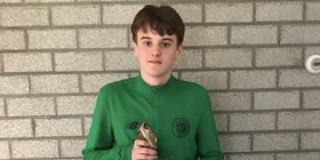 Manchester City is set to beat Arsenal to the signing of Josh Adam from Celtic according to a report from the Daily Mail.

Apparently, Arsenal and City regard the 16-year-old as one of the brightest prospects to have come out of Scotland. He has been playing for Celtic’s youth teams and has been called up to Scotland’s youth setup on several occasions.

He turned 16 earlier this year and Celtic has been trying to persuade him to sign professional terms with them.

However, with Manchester City, Chelsea and Arsenal trying to lure him to England he has decided against continuing at Celtic.

The Mail further claims that City seems to have beaten Arsenal and his other suitors to the player’s signature.

If he had moved to the Emirates, he would have been joining a youth team that has one of the best facilities in the world as well as one of the strongest youth teams in England.

Arsenal has been one team that isn’t afraid of giving chances to their impressive youth players, but that wasn’t enough to convince Adam to join them it seems.

As the summer approaches, Arsenal is expected to sign some new talent for their academy as they look to remain competitive at all levels up to their first team.