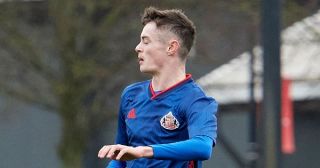 Manchester United appears to have beaten Arsenal to the signing of Joe Hugill from Sunderland, according to the Manchester Evening News.

The teenager has interested Arsenal, and other top Premier League sides after he impressed for Sunderland youth teams.

He scored a hat-trick in a FA Youth Cup game, but it was the brace he scored in his debut for the Under23s that caught the attention of his suitors.

He won’t be 17 years old until later in the year and Arsenal were looking to sign him to their youth team ahead of next season.

The Gunners did beat United to the signing of Sam Greenwood last year, but it appears that the Red Devils have won the race for Hugill.

Hugill would cost them around £300k and he would become the latest high-profile teenager to move to United’s youth academy.

Arsenal has developed a reputation for bringing through the best youngsters in England and Mikel Arteta has maintained that reputation by giving chances to several youngsters in the Arsenal first team.

Ahead of next season, the Gunners will want to sign as many good youngsters that they can find for their academy so that they can remain competitive at all levels, not just in the senior team.