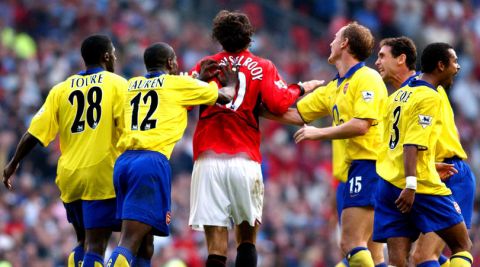 There have been some amazing games between Man United and Arsenal, but one of the most famous is the “Battle of Old Trafford” quite early in our famous Invincibles Season (Sept 2003). In case anyone is too young to remember it, you need to see this video – when Arsenal’s team was full of stars and leaders who would bleed for the shirt.

It was a rough game all the way through as they were our biggest rivals for the title, and when Ruud van Nistelroy jumped on top of Patrick Vieira we all expected the Dutchman to get booked, but the ref came over and sent Vieira off even though there was no contact at all from our captain.

Right at the end of the game, with the score still 0-0, United won a dubious penalty, which would have put an end to our unbeaten run, but we all watched as Nistelroy somehow managed to slam it against the bar. After that the ref blew the whistle and then pandemonium broke out!