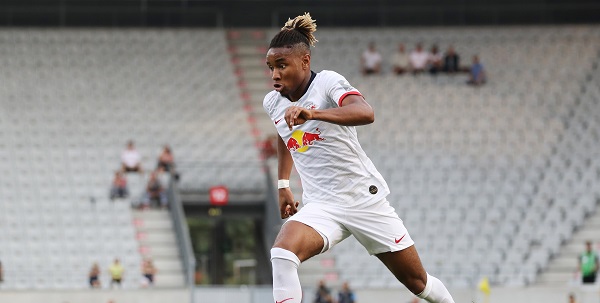 Manchester City has emerged as serious competition for Arsenal in the race for RB Leipzig star, Christopher Nkunku.

The Frenchman has been one of the German club’s major stars in recent seasons and a move to a top club is almost certainly on the horizon.

The Sun maintains Arsenal has a long-standing interest in his signature and Mikel Arteta remains an admirer.

However, Sport Bild via the same report claims City is also very serious about landing him.

The Premier League champions need a new goalscorer and they believe he can deliver that to their squad.

He is not a striker, but the Frenchman has done well while playing as a false 9 in Germany.

Nkunku has been in fine form for Leipzig and has the talents to thrive at the Emirates.

Although City is also on his trail, the attacker could still end up at Arsenal if Arteta can convince him he would be an important player.

The Frenchman might struggle for a playing time at the Etihad, but Arsenal needs attackers and he can easily become the key man at the Emirates.

At 23, he is at the perfect age to join Mikel Arteta’s rebuild and his numbers this season are impressive for Arsenal fans to read.

He has 11 goals and 7 assists from 17 competitive matches this season, making him one of the finest goal contributors in Europe.