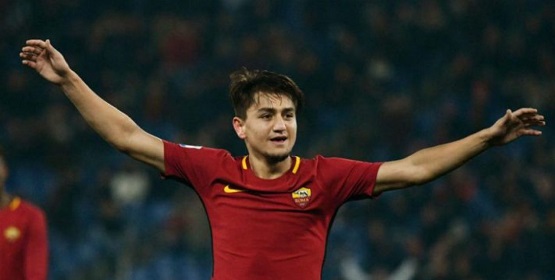 According to the latest transfer gossip coming out of Italy, Cengiz Under is a target for Manchester United as much as he is for Arsenal.

The Turkish international has been at AS Roma since 2017 when he joined them as the most expensive signing from the Turkish league at that time.

He has had an inconsistent few years with the Italians, but he has always attracted the attention of Premier League teams including both United and Arsenal according to Turkish-Football citing Corriere dello Sport.

Roma has been reluctant to sell him before now, but after his poor season that has been ravaged by injuries, the report claims that they will listen to offers for his signature.

The same report also claims that he has been valued a £27m, a fee that shouldn’t be a problem for both Arsenal and Manchester United to pay.

The Gunners have built a reputation for signing young players and turning them into better players.

While Under has struggled in Rome, Mikel Arteta might become the manager who helps the 22-year-old reach his full potential.

The Gunners have already started their summer business after they handed new deals (Arsenal.com) to Pablo Mari and Cedric Soares. They also agreed to a new one-year deal with David Luiz whilst extending the contract of Dani Ceballos.