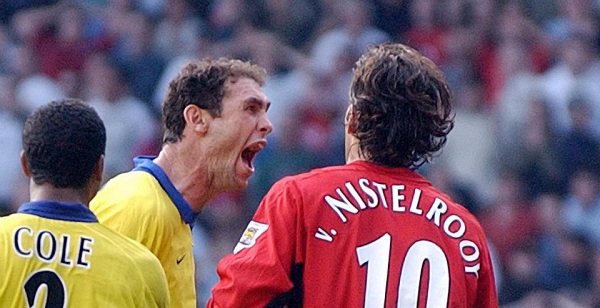 Martin Keown has recalled Arsenal’s goalless draw against Manchester United in 2003 that helped the Gunners finish that campaign unbeaten.

The Gunners faced the Red Devils in a famous game that Patrick Vieira got sent off for a foul on Ruud van Nistelrooy and the game descended into a mini-chaos as Arsenal players blamed the Dutchman for getting the Arsenal midfielder sent off.

Keown, who was an important Arsenal player at the time, recalls that game vividly and claimed that he didn’t trust van Nistelrooy because the Dutchman always fell easily.

He claimed that although he and the former Manchester United attacker later had a talk to settle their problems, they had “history”.

He added that the way Arsenal players went about that game showed him just how much wonderful spirit was in the team at the time.

‘I shook hands with him in the FA Cup semi-final and I had a chance to speak with him. He seemed ok with it, but we had a history,’ he told BT Sport’s Early Kick-Off.

‘There had been a few incidents between me and him. It was about trusting your opponent. I liked to play against people I could trust.

‘He would collapse in the box like a pack of cards. He was quite a tough individual, he was a great goalscorer – he could really sniff out chances, but it’s a trust thing as well. So when it came to that game he got Vieira sent off and it kind of exploded.’

He added: ‘That game has been talked about an awful lot, it reminds me of the special spirit that players had, me and Ray Parlour… the french guys followed us into battle, there was a togetherness and a tenacity to win.

‘We went to Old Trafford in those days – the aura that those players had, it was so difficult to get anything. They dominated football for so many years, we were wrestling it away again and by 2004 we’d done it.

‘They weren’t happy and it kicked off, it always did when we played Manchester United but I have the ultimate respect for them.’

That Arsenal team would go on to have arguably the best season by an English team in the Premier League, as they won the title by going the entire campaign unbeaten.

As for Nistelrooy, he is a cheat plain and simple.