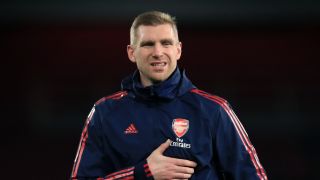 Arsenal were the top spenders in the transfer window in the summer, and it has to be said that there were some very astute buys by Edu and Arteta.

But our Academy manager Per Mertesacker insists that spending like that every year is “unsustainable” and the club needs to get quality graduates coming through the youth system to save Arsenal money in the future.

“I think the closest, at the moment, to make that step is Flo Balogun,” said the German at a Supporters club event at the Emirates (as transcribed by Football.London).

“He’s transferred in to the first team dressing room. He still plays U23s football and probably most likely will go on loan in January because you need extra exposure to get to that next level so he needs to make that transition.”

Arsenal certainly need him performing by next summer whe Lacazette and Nketiah will be leaving on free transfers, rather than buying expensive replacements.

Mertesacker was then asked if he could guess which would be the next youngsters to break through, and he replied: “You can’t always predict,”

“I think Emile and Bukayo got their chances and performed really well. We won against Chelsea and then a couple of games. So, these are the moments you have to take advantage of.

“But which player is then able to and has prepared himself for that moment to come? To play well enough for the manager to say, ‘listen, he’s ready and he can make the step up, he’s part of the first team, we don’t need to buy a player for 30 or 40 million’, which is not sustainable.

“Edu and Mikel have done a lot last summer, but that’s not sustainable for us as a football club.

“We’re not going to do that on a consistent basis so we need to make sure that the flow of top players from the academy is constantly there. So they don’t need to look to the market. We made a big effort, but that’s not sustainable for us in the future.”

He then explained that Arsenal are going to crank up the amount of youngsters out on loan (like the Chelsea model I imagine) from next summer.

“With loans, I think roughly two years ago we started to put more emphasis on the loan market, on having more players in the system,” the 37-year-old said.

“We will go up to 20 players roughly potentially next summer who will go on loan.

“We’re looking at players who have probably played 23s football for a year or 18 months maximum because that is what we believe is worth the experience. Because if a player has played 20 or 25 games at PL2 plus a few games in the Papa John’s Trophy, they need to go to that next step towards adult’s or men’s football. So this is kind of a threshold.

“Then it depends on injuries, but we say between 12-18 months should be enough to prepare them for that experience.

“Then it’s all about collaboration and what the market says. We don’t have a partner club who we can ship out players to where we can say ‘do you want to take five of our Under 23 players?’ We need to build relationships with other clubs right now and in the future where they’re keen on taking Arsenal players into their system.

“Then it’s a collaboration between the player, the agent, the parents and the club to find the best opportunity.”