Mesut Ozil attended his first match as a Fenerbahce player as his new team beat the visitors Kayserispor 3-0 at their Ülker Stadyumu, reports Mail Sport.

The German was officially made their player yesterday after he agreed to end his almost 8-year stay at Arsenal.

He played no competitive football from March and wasn’t named in the Arsenal team to play League or Europa games this season.

Facing the prospect of staying on the sidelines for the whole of this campaign, the German decided to terminate his contract and join the team he supported as a boy.

He started training with them on the day his transfer was made official and even penned an emotional farewell letter to the Arsenal fans. 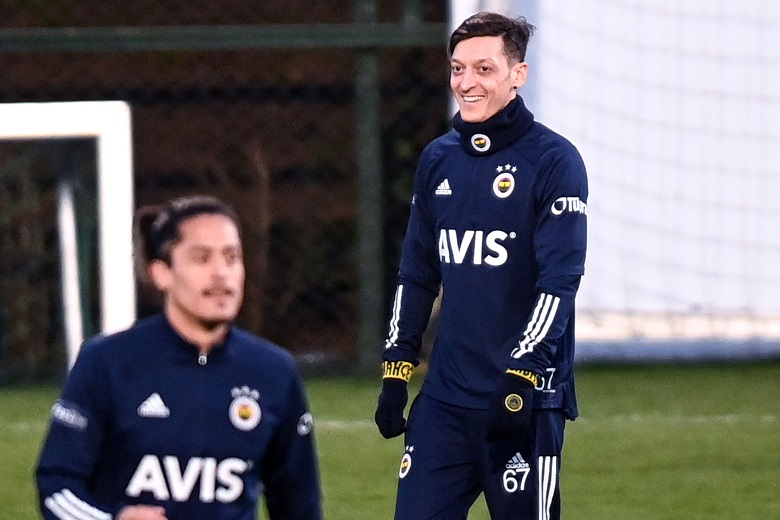 Fenerbahce’s new transfer, German midfielder Mesut Ozil (R), takes part in his first training session with the team on January 24, 2021, in Istanbul. – Arsenal midfielder Mesut Ozil has joined Fenerbahce on a three-and-a-half year deal after last playing for the Gunners in March, both clubs announced on January 24. The 32-year-old German was omitted from Arsenal’s Premier League and Europa League squads this season and his reported deal on a weekly salary of £350,000 ($475,000) was set to expire at the end of the current campaign. (Photo by OZAN KOSE/AFP via Getty Images)

But he isn’t ready to start playing competitive football after not seeing action for that long.

He watched on as goals from Mame Thiam, Mbwana Samatta, and Papiss Cisse helped Fener to the victory and take them back up to second on the Turkish league table.

They are just two points behind Besiktas and would be confident that they can get to the top of the league table when Ozil starts making a contribution.

The German provided 71 assists and scored 44 goals in 254 Arsenal appearances.