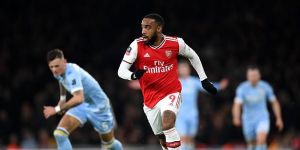 New Arsenal manager Mikel Arteta has expressed support for striker Alexander Lacazette amid his struggles in front of goal.

The former Lyon star would do well to reach Euro 2020 with as part of the 2018 World Cup winners’ contingent this year but it would take a special upturn in form to make that happen. Lacazette has only found the back of the net on five occasions in Premier League competition so far this term and, despite being one of the best forwards in the top flight, he’s going through an ordeal of a campaign.

Arteta, though, has backed the Frenchman to get back among the goals soon. The forward last scored on December 12 but his manager reckons he only needs one to go in to spark that needed fettle.

“He had the chances to put away [against United]. He has been really helpful in giving us a lot of options. He makes his team-mates better, that’s one of the biggest qualities,” the Spaniard told the Evening Standard’s James Olley.

“As well, every time he is in front of goal normally he is so clinical. I am disappointed that he hasn’t been rewarded with all the work he has done in the last three games because he could have scored three or four goals easily. But the goal will come for him naturally because he is a natural finisher.

“Does he just need one to go in anyhow? Exactly. And maybe a little bit fresher legs will help as well.”

Lacazette started in Arsenal’s recent win against Manchester United. He did not get on the scoresheet during the Gunners’ 2-0 victory but his movement in the final third proved crucial as it helped keep the Old Trafford side pinned back. His unselfishness was quite beneficial to the likes of Nicolas Pepe, Pierre-Emerick Aubameyang and Mesut Ozil too, with Pepe scoring the first goal of the match in the eighth minute.

The Gunners are still nine points adrift of fourth-placed Chelsea as they sit in 10th on the Premier League table and could certainly use an influential Lacazette up front.

They are set to face Crystal Palace next in the Premier League and are 19/20 to snatch a win, while the Eagles are 58/19. Paddy Power are offering 14/1 odds on Arteta’s side ending the 2019/20 season in the top four, something which still appears to be a huge ask at the moment. United are 3/1 with Coral, Chelsea are 1/2 with Betfred and Tottenham Hotspur are 4/1 with Betway. Sportpesa have Arsenal 15/4 to finish in the bottom half.

Where Euro 2020 Betting Odds are concerned, France are 13/2 to follow their World Cup triumph up with a European Championship with Bet365 but England are 4/1 favorites. Belgium are 5/1 to win the tournament with Ladbrokes but Unibet are offering 6/1.

Holland are 6/1 with Betfair, Germany are 8/1 with William Hill, Spain are 9/1 with Betvictor and Italy are 12/10 with Marathon Bet.

Could Lacazette finally get back into the French international side? Things will have to change if he will….