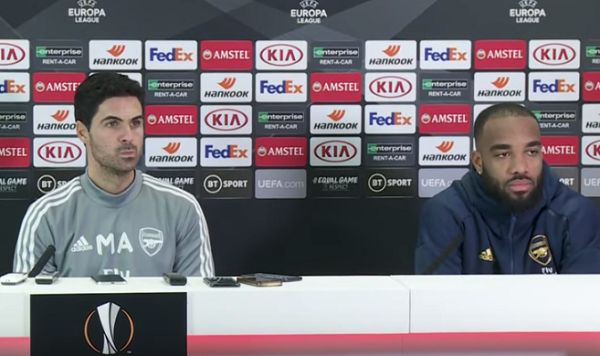 Mikel Arteta continues to have faith in Alexandre Lacazette

Arsenal fired blanks as they were beaten by Leicester City in an empty Emirates Stadium on Sunday.

The Gunners had been looking to build on their 2-1 come-from-behind win over Rapid Wien on Thursday, but Jamie Vardy came off the bench to combine well with his fellow substitute, Cengiz Under to inflict a 1-0 loss on Mikel Arteta’s men.

The Gunners had started the game with Alexandre Lacazette as their top striker with Arteta hoping that the Frenchman would continue his fine start to the season and score another goal for the club.

He did score, but on the intervention of VAR, the goal was chopped off and that would have given the Gunners the lead.

Despite not scoring, Arteta was full of praise for the French striker in his post-match interview. He claimed that the Frenchman was sharp in the game even though he didn’t score a goal, but he did well and was aggressive in the game.

‘Obviously, strikers need goals and he started tonight, he looked sharp and he was really aggressive in his play,’ said Arteta as quoted by the Metro.

‘Yeah, he had an opportunity to score that goal and he didn’t. ‘I just support them and give them more confidence and [help them] try to create more.’