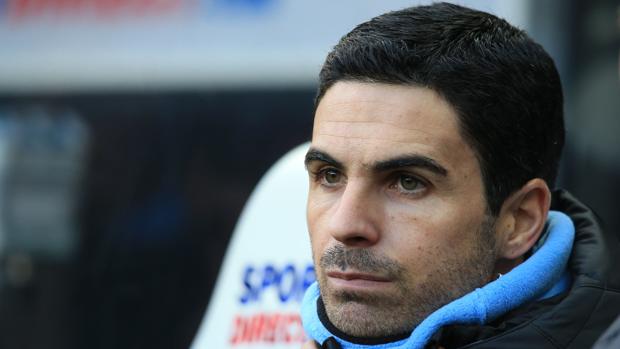 Mikel Arteta looks and sounds like he is destined for greatness

When Arteta turned up for his Arsenal presentation wearing a dark turtleneck and a coat over it, carrying all the crisp sharpness and gait of a billionaire protagonist in any of Harlequin’s “Hot Romance Category” novels, many referred to the similarity of that clothing choice to Guardiola’s. Paul Scholes declared it wasn’t respectful of his first appointment enough. “I don’t think he will be the right man,” he added.

Nevertheless, Arteta strongly impressed fans and the general press with the clarity of his speech. Everything he said gleamed with a layer of penetrating intelligence. Arsenal were in the direst form of their recent history. Their former coach, Unai Emery, a man who spammed the Europa League with Sevilla and spammed the French League with PSG, always spoke about being protagonists; “My idea is to be protagonists,”: a good soundbite that, by being broad and non-specific, collects all the qualities of good soundbites. Protagonists, attacking football, pressing, culture, atmosphere, change, brexit, impeachment, evolution, fake news; everyday mumbo-jumbo that might mean anything, everything, or nothing at all. Arsenal went from Wenger’s thoughtful press conferences that sometimes felt like dinners at some posh restaurant to Emery’s second-hand pep talk. Fans inferred that “protagonists” meant something positive — it had to mean something positive. But as a Forbes headline put it after the news of his sacking broke, Unai Emery was never the protagonist.

If Arsenal had lost clarity with Emery, Arteta’s press conference indicated that they might gain it back. Behind his smiles was a zany self-consciousness, an awareness of how anything, including the media presentation, could be a distraction: it was the smile of some widely-acclaimed whizkid from some back country high school asked to prove himself at the Big Science Contest, a smile that couldn’t rest easy.

Three games later, clarity turns out to be the most important thing that Arsenal have gained under Arteta. And a new tactical system: inverted fullbacks, inside forwards, compactness, passing lanes, pressure against the byline, Mesut Ozil, switching the play, diagonal runs and overloads. Against Bournemouth, Chelsea and now Manchester United, they have looked like a glazed version of a Pep Guardiola team, passing around their opponents and mass production of scoring chances. At some points during those matches, as the back four played around the Bournemouth, Chelsea and Manchester United press, it seemed as though David Luiz only needed to make just one calculated swing of the boot and Lacazette, Aubameyang, Pepe and Ozil would have a free run on 3 or fewer defenders.

In the first halves of these matches there is a ridiculous — but palpable and growing sense — that Arsenal are gaining a presence of mind, a crucial sense of positioning and movement, that instinct for a clever pass to a player carefully positioned deep in the heart of the opposition defence — stock Pep instincts — that should not belong to them yet. They are exhibiting a nous for the essentials of Pep-ball at such a level that coming from off the back of the worst form of their recent history, Arsenal could dominate better-rated Chelsea and Manchester United squads with relative comfort and for large periods, as if they were not four points away from relegation, as if they did not still have Mustafi, as if Mikel Arteta had surgically transplanted Man City attacking play through a handful of training session… as if this was a team still carrying the spirit and soul of Arsene Wenger: a team born to play attacking football.

Two instances illustrate the point: For Arsenal’s first goal against Manchester United, Kolasinac had drifted in while Aubameyang stayed out wide with the ball at his feet. Lacazette was arriving in the box after setting play from deep and Ozil was already lurking. Aubameyang had several passing options but one of the most difficult he could pull was to try and spin the ball around the vertical line of defenders towards Kolasinac. The Bosnian leftback seemed ready. Manchester seemed ready, too. Both sides aware of each other, both confident in their bets. Aubameyang pulled the pass. Kolasinac was ready and, would you happen to know it, onside. He ran toward the near post and just before the angle disappeared completely, he released the ball for Ozil and the arriving Lacazette almost in front of the goalkeeper. The ball took a deflection and off it spun, away towards the penalty spot where Nicolas Pepe, strangely expectant, was in acres of so much space he could have called for his spouse, ordered an elaborate lunch, a table for two, have a nice date and still have enough time to tip the delivery guy before any of Luke Shaw or Maguire could get to him.

Manchester United had prepared against a chance like this but it felt like they were chasing players rather than the ball, chasing something that had already happened. They had closed down Ozil and Lacazette and Kolasinac and by the end, Nicolas Pepe was strolling in rich real estate, deciding what to do with his gold mine, his copper mine and his scenic waterfall. It felt odd; it seemed as if the Manchester defenders were after destiny, no more than training fillers for a pattern familiar at Man City. It was, in the end, an easy goal that shouldn’t be – and palpably out of Guardiola’s textbook.

There was also this other time when Ainsley Maitland-Niles, another fullback, drifted in deep behind Manchester’s defensive line. Ozil, with a casual swing of the foot, found him from midfield with a ball over the top. Aubameyang and Lacazette, previously jogging away from the Manchester United defensive line, were suddenly reversing at full throttle, bearing down like hungry wolves on the penalty box. It felt all too familiar again, too prepared, the odd sense of destiny setting in as the attack clicked into existence from nothing. It was suddenly 3 against 3. The 22-year-old defender ultimately misplaced the pass and the ball was put out for a corner. Aubameyang jogged to a stroll and smiled at him — you could tell they were finding it easy.

Arteta really looks the part on the side of the pitch. Smart and sleek in his dark turtleneck and lean trousers, with the hint of a trainer about him. His eyes have such a focus and intensity to them. Take in his brows, too, and his irresistibly perfect hair slicked backward: he literally looks like one of those people destined for success. He’s 37 and his inferior, injury-ravaged squad are in cruise control, babysitting the second biggest team in Manchester. When the goals go in, his celebrations are ecstatic but contained, joyous but proper. He just won’t let anything distract him. There is still so much left to do. Despite that, all he can do right now is stay on his feet as his team hold Manchester United at a comfortable arms-length. By contrast, Ole Gunnar was in his seat, looking the part of a man with a failed plan, resigned to what he was seeing on the pitch.

“I felt they played really well, and sometimes you’ve [just] got to hold your hands up [to that],” said the former Molde manager. It was a look of resignation on his face, a little sigh in there, too, the kind you’d expect to see from coaches who’d just lost at the Etihad Stadium; a tone of “What can I do?”

Meanwhile, Arteta is bright as he walks into the conference room. His ruby-black eyes have a lighter note to them, like sunlight seen through a wine bottle. He has hugged all the players, thanked the fans. His hair is sleek and impeccable despite the drizzle. Previously he’d expatiated on how his style of football would require optimism, determination and commitment. You had to believe that Pep-ball could be done here, too, he seemed to be saying, even after all this chaos and vagueness that Emery had left behind. Just put your foot and heart to it:

“I don’t want people hiding. I want people taking responsibility for the job. Anybody that doesn’t buy into this is not good enough for this environment or culture.”

That was not a soundbite, and nobody was hiding here. Everyone had a good game. Lacazette might be out of sorts with his shooting boots but he did everything else right. Xhaka was imperious. Kolasinac played through injury and cramped out. David Luiz looked like a general. Ozil was tracking back and preventing a counter in the 92nd minute. And Bernd Leno who, for a change, had the least to do today, took a strong kick to the chest.

Arteta hints at a smile as though he knows he can’t afford one yet. It took Pep Guardiola and his vast Qatari funds a year to get Man City running up to pace. It still all remains a daunting task. But if anyone can do it, if anyone is working in the moment, it’s Arteta. His eyes tell it all, resonating with the declaration he made after his appointment: “I will burn every drop of blood for this football club to make it better.”

AGBOOLA TIMI ISRAEL is a nineteen-year-old writer who is considering his career choices. He can be reached on Facebook and email at agboolaisrael8@gmail.com