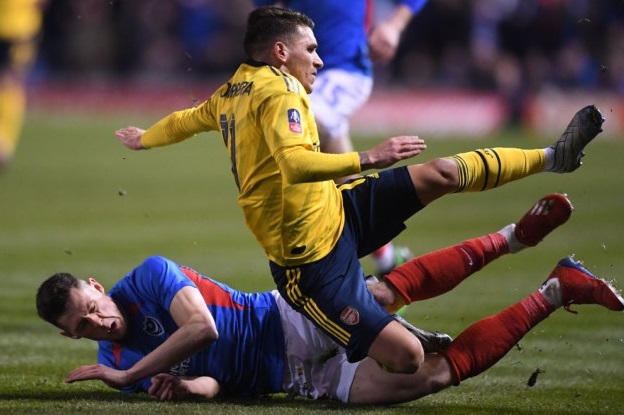 Lucas Torreira may play for Arsenal again this season.

Lucas Torreira was reported to be out for the rest of the season after he fractured his ankle in Arsenal’s game against Portsmouth.

He is set to be out for as long as ten weeks and may not play for the team again this season in what is a huge blow to Mikel Arteta’s plans for the rest of the season.

The midfielder has been used as a rotation player for most of this year but remains a key member of the Arsenal team as Mikel Arteta plots a return to European football.

His injury has come as a major blow to the team and most of the club’s fans have been fearing for the worse.

However, Arteta has provided them with a glimmer of hope after revealing that he could yet play for them again this season.

The Spaniard claims that depending on how the player heals between now and the next two weeks, he could be scheduled to return to action before the curtains are drawn on the season.

Ahead of Arsenal’s game against Manchester City, he said per Football London: “I wouldn’t like to rule him out.

“Lucas is really keen and would like to play again this season, whether that is realistic or not we will know in the next two or three weeks.

“It depends how the bone is healing and how he is doing with his rehab, but we don’t know anything for sure.”

It would be a huge lift for the squad if Torreira returns from injury sooner than expected but it is best not to be too hopeful.