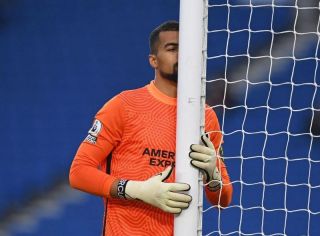 Brighton goalkeeper Rob Sanchez has fired a warning that his side are looking to build on their win over Manchester City by beating Arsenal.

The Gunners go into the final fixture of the season knowing that anything less than a win will ensure them of missing out on Europe, as well as needing both of Everton and Spurs to fail to win also.

We will have the advantage of playing at home in our final game of the season, which could be a huge boost with fans having returned to stadiums this week.

That home advantage helped Brighton to overcome Manchester City in midweek, despite trailing 2-0 before coming back to win 3-2, and the Seagulls are now targeting another bid win to close out their season.

“With the fans back and three points against the champions at the last home game of the season, there’s nothing better,” Sanchez told Brighton’s official website.

“I am delighted and in the changing room after the game it was amazing. It was an unreal night.

“Everyone is super happy with the result, and we’re going to Arsenal on Sunday with the mindset to get three points and finish off the season as well as we can.”

Brighton are safe from relegation, but could climb as many as three places to 13th in the Premier League table with a win, but there is much more on the line for our side headed into the final match with a place in Europe up for grabs.

Will Arsenal need to be at their best to overcome a resilient Brighton side at the Emirates come Sunday?