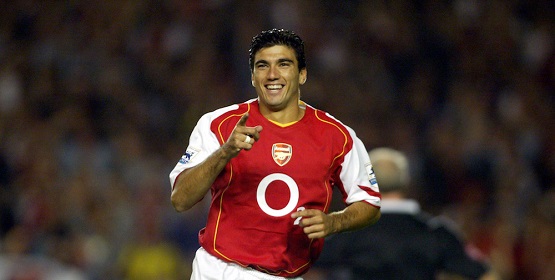 This weekend was scheduled to be the FA Cup Final. No club has won the competition more times than us, and it’s a trophy we still have a realistic chance of winning this season. The BBC have been compiling their top 50 moments in the history of the tournament in line with a programme on the same theme.

Well those regular to Just Arsenal will know I love a top 10 list so why not give my own countdown of the Gunners best moments in the most famous knock out Cup in the world.

Let me stress these choices are personal to me, which is why I will only cover what happened in my life. I am eager to hear yours in the comments below.

For the fun of my own research I set the criteria of not including any Finals. I mean we have won it so many times it would make it quite a predictable top 10.

10- North London Derby Semi-Final
Not just did we book our place in the 2001 Final, but in the process ensured Spurs would again win nothing. Oh, and it was Glen Hoddle’s first game as their boss. The only reason this isn’t ranked higher is …. because of Spurs. They were so poor; it was clear we would win the moment Vieira equalised. Seriously, 2-1 to us flattered them. They scored early and tried to defend for the rest of the afternoon. When Pires scored the winner, it was almost an anti-climax it was so easy. It’s a shame this was at Old Trafford not Wembley

9 – Reyes Debut
Reyes best game for us might very well been one of his first, the day he scored his first two goals as a Gunner. We broke our transfer record to buy the Spaniard in January 2004, but the timing suggested Arsene Wenger wanted to give him time to settle into English Football, hence why he was on the bench when Chelsea came to Highbury. With us losing 1-0, Reyes came on and scored twice in 5 minutes, the first a 25-yard thunderbolt. Reyes Is the only Invincible to no longer be with us having died on June 1st, 2019.

8- We Gave Sheffield United A Rematch
In 1999 Sheffield United had kicked the ball out of play so their striker could get treatment. As per tradition Arsenal threw it back into play so Bruce’s men regained possession. New to English Football however Kanu had never heard of said sportsmanship so he decided to square the ball to Overmars. Strangely the man who scored the goal got little blame unlike the man with the assist. We showed class by immediately suggesting a rematch. Would we have done that if it were Man United in the League or a Barcelona in Europe? Probably not…

7- Thierry Wears The Shirt Of …. Portsmouth
This game could have made the list for how well we played that evening at Fratton Park (we won 5-1), which is why Pompey fans first gave Thierry a standing ovation for his performance, and then chants of asking him to sign, and a request to give them a wave. The Frenchman acknowledge their support by applauding all 4 parts of the stadium while wearing a Blue shirt at the final whistle. To this day the striker talks fondly of the atmosphere at Pompey and calls them his second favourite fans (gooners are his number one choice of course). Trust me, not a lot of players who had won it all would take the time to appreciate the beauty of an old-fashioned stadium.

6 – Theo Tell Spurs What The Scoreline Is
Theo divides opinion among our fan base. To some he never developed, became too comfortable and admits himself that he could be too nice. Still though not many have scored over 100 goals for The Arsenal. Sometimes though you need those little moments to cement you in the minds of gooners forever. In 2014 we were beating Spurs 2-0, even better because it was Tim Sherwood’s first match as their new boss. Walcott had to be stretchered off, at which point the away crowd started to throw coins at him. The player calmly put up two fingers (not those two fingers) just to remind them what the score line was.

5- Seaman’s Best Save
We were beating a Championship side away from being in our third straight FA Cup Final but in truth we were making hard work of seeing out a 1-0 win. Sheffield United were growing in belief, sensing an equaliser was coming. A header saw the ball seemingly heading into the back of the net with the ball at this point behind David Seaman. Somehow our keeper used his hand to somehow claw the ball back into play, showing amazing strength to palm it out as he’s falling backwards. At the age of 39 it was his best save ever.

4- Redemption
Our squad who won the Double in 2001/2002 admitted they were motivated to win the FA Cup by how they lost the Final the year before (the Michael Owen Final). So, it was ironic we faced Liverpool in the third round.

It’s often said that the Vieiras, Pires and Ljungberg’s were not just talented, but they could fight you as well. So, defending a 1-0 lead with two men sent off (Jamie Carragher had also been red carded) our defensive strategy was to give the ball to Henry who just ran with the ball, boy did he run. Our striker had a busted lip and his only way of dealing with the bleeding was to suck on a bandage. Proud to be a gooner in games like this

3- Seeing My Club At Wembley
I’m a red member at the Emirates which gives me final priority on buying match day tickets. You very rarely get access to away games and certainly not days out to Wembley. Luckily though of all the teams we were drawn against in the semi Final was Wigan, not a well-supported club. So, when our opponents failed to sell out their allocation Arsenal were given some extra seats to sell. They decided to make these tickets exclusive to red members meaning I can one day tell my children I saw my team at Wembley. We needed penalties to beat a Championship side and I left the Twin Towers emotionally spent.

2- The Game Where I Fell In Love With Football
So why would I put Man United beating us 2-1 in a semi-final 2nd in a list of my best Arsenal FA Cup memories? I was a fan of the Gunners at this point, but it wasn’t everything to me, I had other passions and liked other sport just as much. This was the match I credit that made me fall in love with the Gunners. Even as a child I felt such an injustice for our players, the chances we missed, Bergkamp having a 90th minute pen saved, Anelka thinking he had scored, Giggs scoring from United’s only attack in extra time, the tie had it all. Sometimes you have to experience the lows like this to appreciate the good times.

1- The Legend Returns
I was going through some personal problems in 2012 so was excited for the distraction of going to watch Arsenal vs Leeds. The selling point was the possibility of seeing my hero Thierry Henry one more time in the famous red and white shirt. It was only an outside chance of seeing him feature. At best he might be fit enough to come off the bench. When he was brought on (in an otherwise terrible game) it’s the most emotional the Emirates has ever Been. Minutes later he saved the Gunners one final time with a trademark finish. I never felt our stadium react that way. To put it in perspective the girl who I went to the game with was in tears …… and she was a Liverpool fan. Imagine how I felt?

Just for that moment all my worries went away, the classic example of how the sport can be escapism.

Again, this list is exclusive to me, often for personal reasons, and I am really interested to hear your FA Cup memories. I left out finals but feel free to include whatever stands out to you.