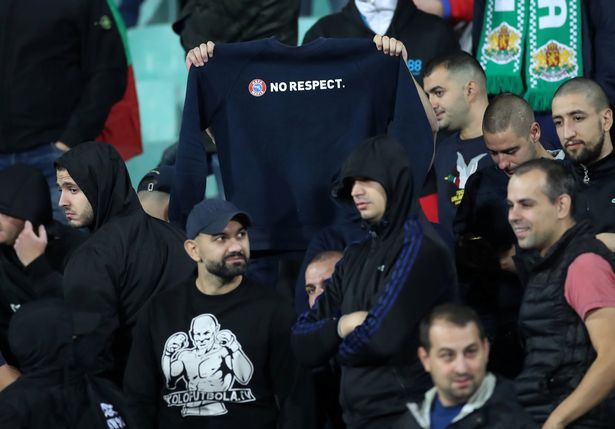 There have been many discussions on Just Arsenal about the levels of racist abuse shown in England during Premier League matches, but our fans behaviour is dwarfed by the size of the problem in other European countries as we saw in Sofia last night, and the football took second place although we saw our players destroy Bulgaria 6-0 in the end.

No-one is going to talk about the match, so let us have some first-hand descriptions of what happened. The Football Association chairman Greg Clarke was disgusted by a section of the crowd, most of whom were ejected from the ground at half-time. “I heard examples of appalling racist chanting,” he said on the BBC report.

“I was looking at a group of people, all in black – about 50 of them – who were making what looked like political fascist gestures. I couldn’t be sure, it was 100 metres away but it looked appalling.

“They were visibly emotionally upset, and I spoke to Gareth after the game too and I offered him our full support.”

“Uefa, who I’ve spoken to throughout the game, at half-time and at the end of the game, will be carrying out a thorough investigation to make sure this appalling scene of terrible racism is treated appropriately,”

One of the England players Tyrone Mings was making his debut for England reported that he was happy how the team dealt with the situation after the match was stopped just before half-time: “Just before the end of the first half the appropriate next step was to return to the changing room,” he said.

“We made a common-sense decision to play the remaining few minutes and decided at half-time. Everybody made the decision. The manager, the team, the supporting staff. We spoke about it at half-time and we dealt with it and escalated it in the right way.

“I am proud of how we dealt with it and took the appropriate steps.”

The England manager Gareth Southgate said: “I explained to the players that if anything else did happen in the second half we would be coming off.

“We all saw the second half was calmer and that allowed our players to do their talking with the football.”

This behaviour certainly makes a mockery of the statements from the Bulgarian coach Balakov, who made this very rash denial before the game. He said (also on the BBC): “What I can say is that I don’t think we have a problem.

“In the Bulgarian championship, we have a lot of players of different ethnicities and skin colour. I don’t think that we have this big problem like, for example, England do.”

When asked to explain, Balakov continued: “What I meant was that in the Bulgarian championship we’ve not had such problems while there have been incidents in various levels of English football involving racism, which I consider something normal because it’s a big country with a very diverse population.

“But we don’t have this problem in Bulgaria, I can assure you of that.”

Well, we certainly are assured right now that he was talking complete codswallop!