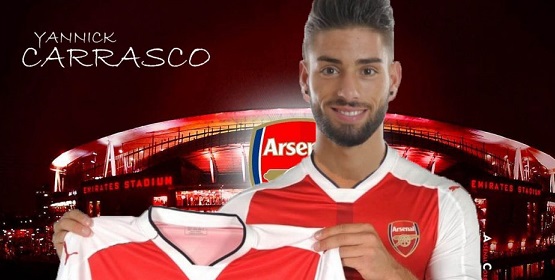 Arsenal made no secret of their interest in signing the Belgian international Yannick Carrasco in the January transfer window ,and according to numerous reports the 25 year-old is still extremely keen to come and join Unai Emery at the Emirates.

Carrasco, who is curently plying his trade at Chinese side Dalian Yifang, has made it very clear that he has not settled in China and is just as open about being in talks to return to Europe, specifically to the Premier League. “Negotiations are going well,” the ex-Atletico Madrid winger said. “I am aware that I am an important player for the team but I hope they let me leave. From a personal and family point of view, I would like to return to Europe.

“The Premier League is more physical, but there are also a lot of spaces to run into.”

The Gunners are desperate for a winger to join to provide better service to our two main strikers, and the early signing of Carrasco may be a sign that Arsenal are trying their hardest to start strengthening the most problematic areas of our squad.

It would certainly cheer up Arsenal fans that are feeling a little nervous about this transfer window….