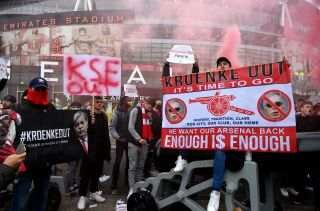 Arsenal’s dreadful 2020/2021 campaign has finally ended typically negatively as they miss out on European football for the first time in over 20 years.

They replaced Arsene Wenger in 2018, but the Frenchman was in Europe every season that he managed the club.

Since he left, they have been on a downward spiral and even Mikel Arteta is struggling to stop the slide.

They would now look to rebuild their team and look to end next season inside the top four.

The club’s players may feel relieved that they have had to play this season without fans in the stands because it would have been dreadful to watch and no one knows how the supporters would have reacted.

After their last game of the season against Brighton, the club posted a video of Arteta and his players clapping and thanking the returning fans for their support.

But the tweet didn’t go down well with all their supporters with some of them making their feelings known and at least one fan says they should have done better for the support they got.

But you were never there for us through thick not to talk of thin. Ti yin ti ta danu

repay the support by giving us grealish

Get rid of Willian, send Ceballos back asap, shift Bellerin, then never speak of this year again.#KroenkeOut

Nothing…and I mean NOTHING, Can separate me from this beautiful club.

But please, I’m begging, do better next season & make us all proud again. We get bantered too often on these streets. 😭😭😭 pic.twitter.com/U7NoqoOA8n

Have to be a old arsenal fan like me to remember supporting through the thick. Progress ended with kroenke and begins with new owners. #KroenkeOut