Granit Xhaka is expected to be announced as having joined Arsenal in the coming hours, having been snapped in the official new kit of next season. 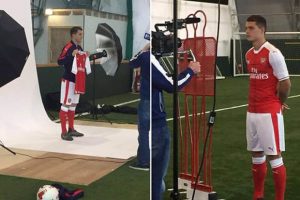 The Swiss international has been watched on a number of occasions this season, with the Gunners believed to have prioritised his arrival, and they now appear to have wrapped up his signature swiftly.

Xhaka will become the first signing of the summer, and only their third outifeld arrival in the past 18 months. The fee is yet to be confirmed, but most recent reports claimed a £25 Million initial fee had been agreed, with a further £10 Million likely to be paid in add-ons, should he trigger certain clauses.

Borussia Monchengladbach have been resigned to losing their club captain for some time now, and their star man said all of his goodbyes following their last Bundesliga outing of the campaign, when he was seen hugging his coaches, and received a standing ovation from the fans.

It remains to be seen how he will fit into Arsene Wenger’s plans, but Mohamed Elneny has impressed since joining in January, and will be hard to shift, which could see Coquelin relieved of some of his first-team duties.

The 23 year-old is very highly-rated by those who follow the Bundesliga, and is believed to be a huge acquisition for the Gunners, who will be looking to hit the ground running next term, in what could be Arsene Wenger’s final season with the club.

I’m sure you all can’t wait to see him in action in the European Championships now! The French boss certainly wrapped up this signing quickly, which can only be a positive sign of things to come. Watch this space…

Will Xhaka go straight into the first-team? Should Coquelin be the man to make way?

The fact is that Arsenal desperately need Granit Xhaka back ASAP
5 December 2021, 11:46