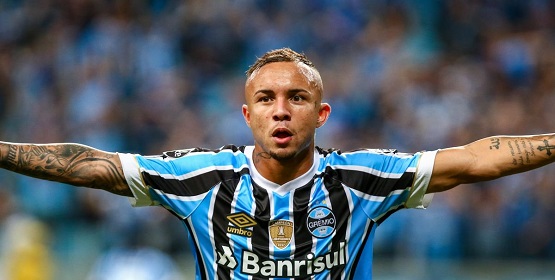 There are more and more reports coming through that Arsenal are genuinely interested in signing Gremio forward Everton Soares with some claiming that the club has already sent a doctor down to Brazil to carry out a medical.

Everton would cost a cool £36 Million and that would more or less wipe out the transfer budget and would surely put in jeopardy other proposed signings.

It would definitely put an end to any chance of us signing Wilfried Zaha and as for William Saliba and Kieran Tierney, you have to wonder where the money would come from for those two.

No doubt the 23-year-old forward is talented, he was probably recommended by Edu, but he is not a defender or box to box midfielder or even a winger. So why go for him?

If the club thinks that the fans will be placated by this signing they are wrong, almost all of us know our defence must be a priority followed by central midfield.

If there is one area we are well taken care of it is up front, in fact, we have already signed a Brazilian attacker in Gabriel Martinelli.

Whatever way I look at this one it just does not make sense.

But the reports of a doctor and representatives being sent to Brazil to complete this one is a worrying development.