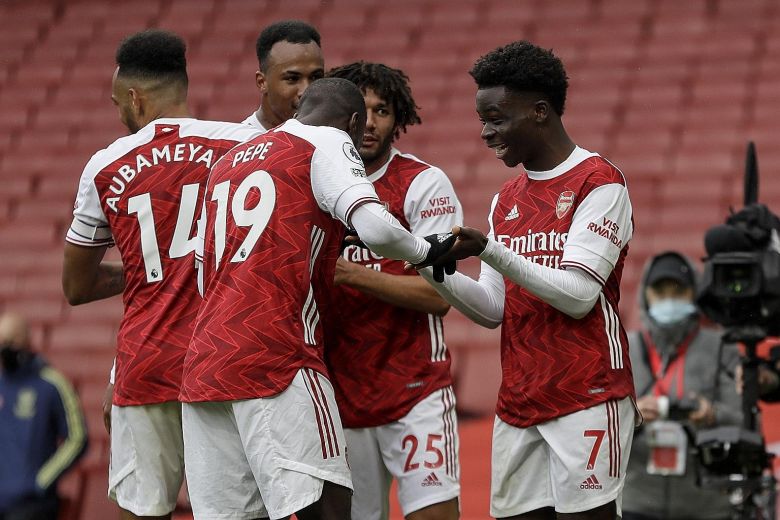 Nicolas Pépé and Bukayo Saka Continue to Develop for Arsenal

When talking about Arsenal, people usually think of their star striking duo in Pierre-Emerick Aubameyang and Alexandre Lacazette. However, their team is slowly becoming more of a well-rounded team especially with the evolution of young star, Bukayo Saka and the continued development of Nicolas Pépé.

In their more recent match against Sheffield United, the duo were the two players that showed out for Arsenal. Their usual star duo had some chances to score but they did not have the best shots. Saka was the catalyst for their offence because he dribbled well and made pinpoint passes. He has become a solid member of the team and you can learn about it if you read more about Arsenal’s latest matches.

However, he was actually the one who scored the opener for the squad. He set the tone for the rest of the match because Arsenal was in attack mode. Pépé scored the second goal just a few minutes later which showed how important these two players are to the team. They are two players who can be the stars of the future especially since Aubameyang is getting up there in age.

Saka was already a known player from last season because he broke out as a regular fixture in the lineup. On the other hand, Pépé did not have the best 2019-2020 performance which hurt his stock. He cost around £72 million which came along with high expectations.

He is slowly integrating himself into the Arsenal system and it seems that he is doing well in his role as the right-winger. Pépé is a player who can create anything when he has the ball. He can out-dribble any defender and he can score in any way that he wants. His dribbling ability is most prominent because he is a flashy player who likes to show his skills. He even managed to dribble past Liverpool’s ace defender Virgil van Dijk once which was a massive achievement.

It is not a surprise that Mikel Arteta is happy as Arsenal’s manager. He has a unique quality to him that just endears him to his players. It also helps that he is excellent when it comes to tactics and adjustments. He was once Pep Guardiola’s lead assistant coach at Manchester City and the influence is evident in how Arsenal play.

When they were playing under Unai Emery, they always had a stagnant offence. When Arteta came in, he unlocked the potential of many players. Saka is one of those players and it has turned out well for everyone involved. He has grown into the team’s best playmaker and with Mesut Ozil not playing regularly, you can expect Saka will hold on to that role for years to come.

Arteta himself is excited about Saka’s development. He expected him to grow as a player but the intangibles are evident in how he plays. The manager sees this from the sideline and in training sessions.

The Boss said on Arsenal.com ‘His communication has improved a lot towards his team-mates as well because he feels more part of the team, he’s integrated, he feels important in the team I think. What I like about him is that he’s very versatile, he’s really intelligent and that he adapts and has a lot of courage to play the game. It doesn’t matter which position he plays, he acts exactly the same way. He’s so willing to learn and ask the right questions that he can set his own limits’.

Arsenal is quickly becoming one of the best teams in the Premier League. It is also fun to see that almost all of the London clubs are performing well in the current season which is fun to watch. The more competitive the rivalries are, the more fun fans will have while watching them.