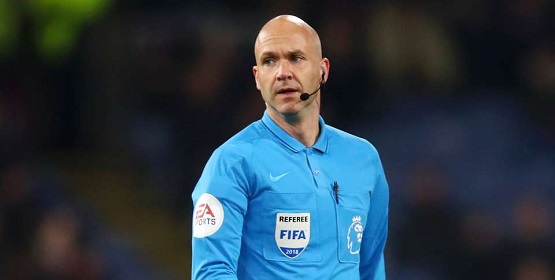 It has been confirmed that Anthony Taylor will officiate the big game on Saturday between Liverpool and Arsenal at Anfield.

Taylor has not been that controversial when referring Arsenal game,s and last season in the seven games that he was in charge of that involved Arsenal there were no losses for the Gunners.

If there is to be any criticism it would be in the Tottenham v Arsenal match when he failed to pick up the foul in the penalty area after Aubameyang’s late penalty was saved by Hugo Lloris.

Five wins and two draws was a good return for Arsenal under Taylor’s officiating last season, and as Premier League refs go he is one of the better ones.

The omens are also good when it comes to the Mancunian taking charge of Liverpool v Arsenal games because the last time he handled a game between the two back in April 2015 it was Arsenal that won 4-1 and he sent off Liverpool’s Emre Can.

As for handling Liverpool matches last season, the 40-year-old oversaw three of their games which resulted in two home wins for the Reds and a loss away at Manchester City.

The only real criticism I can find of Taylor from an Arsenal perspective was back in 2013-14 when Aston Villa beat Arsenal 3-1 at the Emirates on the opening day of the season. He gave Villa two penalties and sent off Laurent Koscielny for two bookable offences and Arsene Wenger was less than pleased calling him stubborn.

Overall I am satisfied with the appointment of Taylor though he will probably not be the biggest factor when it comes from an officiating standpoint, that will probably fall to VAR.