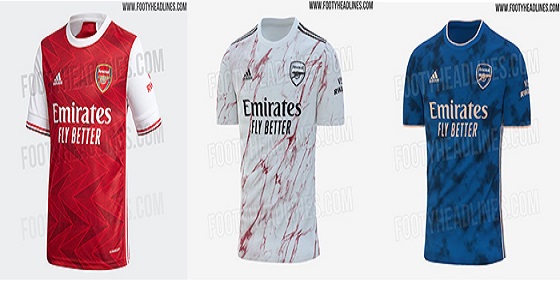 Now all the Adidas Arsenal Shirts are released, what’s your verdict?

I have really loved transferring our kit providers over to Adidas from Puma. Being a big fan of Adidas I have always wanted them to be our kit sponsor, as from what I have seen over the years they have actually produced some decent kits and clothes, and we finally got them to design our kits.

I loved last season’s home and away kits and this season’s home kit design is something very fitting to the club. However, when it comes to the away jersey, well that is a completely different story this season.

Although the idea behind it is nice with the throwback to the marble halls of Highbury that were Commissioned by Herbert Chapman in 1936, when you take that first initial look at the away shirt it just looks like a load of blood has been spilled on it..

Of course you can guess people will talk and have probably spoken and said that the new shirt is because of all of the ‘spilled blood’ coming from the players during the previous season to show that they were trying to fight their way through a season and not achieving what they should be.

Although for me it is not very appealing on the eye, I do like the colour theme and idea, just maybe not together. The white and red (or burgundy if you take a different angled look) is of course a symbol of our club and is always nice to see that history remain.

The third kit is unusually blue, and I think I would have preferred our traditional yellow, but not too bad I guess!

But let’s hope that for the new season, the new Adidas Arsenal jerseys bring us even more luck, as they have done so already, where we have won the FA Cup and the Community Shield so far.

Gooners what do you make of the new Adidas Arsenal kits, now we have got all three?