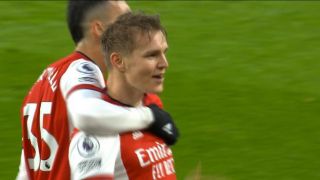 Martin Odegaard scored in three consecutive matches by adding the second in Arsenal’s 3-0 victory over Southampton yesterday, and spoke to the press following the final whistle.

The Norway international joined the club on a permanent deal in the summer, having enjoyed his loan stint earlier in 2021, but his playing time had been a little limited so far this term.

Of late however, he has been asked to operate in behind the striker in a 4-4-1-1 formation, working as somewhat of a shadow striker, and it has been paying dividends.

With a goal in each of the last three games, his contribution can appear obvious, but with us having lost both of the previous two matches he scored in, this one meant more for him.

“I’m very happy to help the team to get results,” Odegaard told Arsenal Media after the final whistle. “I’ve scored in other games as well but we didn’t win so it doesn’t mean anything. Today it’s important that we won so I’m very happy. Yes, it [was my first headed goal], it’s not my biggest strength. I would say I was in the right place at the right time.

There is something satisfying to hear that it is the results of work on the training ground that directly lead to a goal, furthering the belief that there is more positive work happening behind the scenes.

Odegaard had been out of form before being give the chance to operate in the new role, and now looks hard to drop, although with Emile Smith Rowe having remained an unused substitute yesterday, you would expect him to come into the side at the expense of one of Martin, Saka or Martinelli assuming he is 100% fit.

Should Martin’s role be cemented heading into the match with West Ham?

Would Arsenal fans have preferred to get James Maddison over Odegaard last summer?
30 December 2021, 13:57