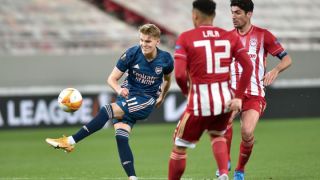 Odegaard ‘made it clear’ that he wants to be at Arsenal

Martin Odegaard is claimed to have made his intentions clear that he would like to stay at Arsenal beyond the summer.

The Real Madrid midfielder moved to North London in January on a temporary loan deal, quickly earning a regular first-team role in our side.

Odegaard appeared to gel quickly alongside fellow future stars Bukayo Saka and Emile Smith Rowe in behind the forward, and the link-up play between the trio was exciting to see unfold in front of our eyes.

The Sun‘s Mark Irwin now claims that the Norwegian has made his intentions clear in his want to stay in North London, writing: ‘Odegaard has made it clear that he would like to remain at Arsenal’.

He also adds that his future is unlikely to be decided until a new manager is installed at the Bernabeu however, while our side will be hoping that they can land the midfielder.

TheAthletic also went as far as to insist that Odegaard was the club’s number one target ahead of the upcoming window.

Will Arsenal’s failure to secure European football not have been a big blow to our chances of signing Odegaard on loan or otherwise? Did the youngster really do enough to deserve to be top of our wishlist?

Odegaard names the hardest defenders he has faced including Premier League star
17 November 2021, 19:30