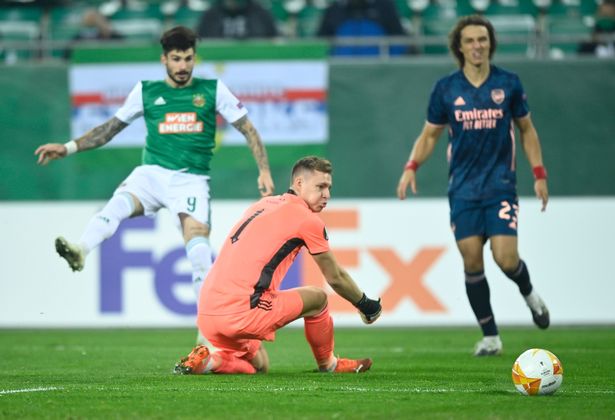 Good win in the end, but it was ropey again by Konstantin Mitov

Hello lovely Arsenal people. We managed to take an away win at Olympiacos, but this time it’s not just with one goal and we’ve set ourselves on the course of prolonging the meaningfulness of this season.

That didn’t mean we didn’t try shooting ourselves in the foot. It wouldn’t be Arsenal otherwise. We started bright with a few chances we should’ve taken, but we couldn’t.

Then when Odegaard found himself in space, he actually opted to shoot, which doesn’t happen too often to our players, their keeper fluffed the ball and it went in! We deserved the lead, BUT…

A lousy attempt of a back pass from Luiz released an Olympiacos player through on goal, but to our relief, he skyed his shot. Be honest with yourselves and think what would’ve happened if Harry Kane was on the end of that?

We of course learned nothing from this situation and in the second while being comfortably 1-0 up in a very slow tempo of the game, Leno having all the time and space In the world, decides to give the ball to Ceballos who’s under pressure from 2 players, loses the ball of course and we concede.

At this point, it’s beyond a joke. The same player, in the same stadium made 2 mistakes that almost crashed us our of the competition just two weeks ago, but yet our goalie decides to give it to him? After the way we dropped points at Burnley?

Leno is to blame on this one for me. But what on earth is Arteta doing? How many times have we shot ourselves in the foot by trying to play out the back? We do not have the players to do it, yet we keep insisting on it.

Then while they were on to using the momentum we happily served on a plate, Arteta just waited with the subs and bear in mind, in the Europa you can make 5!

When there were only 12 minutes remaining and I saw Elneny warming up I was just done with this. Be honest again and tell me at that point in time you didn’t think Arteta has completely lost it?

What happened from the corner we got though was Gabriel smashed a towering header that gave us the lead. I’m not sure what the press conference would’ve been if that hadn’t gone in, but luckily for us it did.

Then, Elneny of all people found himself in space and decided to let one rip and it flew in off the post after a small touch from their keeper and it finished the game. We got two goals by taking a chance and shooting out of the box. There’s something to think about.

In the end it’s a massive result because the Europa is all we’ve got, but the football, despite some great goals, still has a lot to be desired. We are not Man City, we don’t have their players and we cannot play like they do, just because we want to. Arteta is skating on extremely thin ice here.

Most of the goals we concede come from our own mistakes and he does nothing to arrest that. Substitutions are highly questionable and quite late. We got lucky in the Europa twice and maybe faith is telling us something, but are we listening?

I was suggested some YouTube videos of Arsenal in the period 2007-2010. True we didn’t win an FA cup during this period, but my god the football was so much better. We used to attack with pace, pour bodies forward, move the ball quick.

Now we arguably have bigger names in the squad yet it’s honestly dull and difficult to watch. And we shouldn’t be hiding this behind the good result we nicked in the end.

I know we’ve bombed the league, but the chance to kill Jose Mourinho’s and Tottenham’s top 4 hopes surely should be motivation enough? I just don’t see how we’ll do it and I’m really worried for our defense.

What also discourages me is Arteta favoring some players. Saka was awful again today, just like Burnley. Willian was poor… Pepe was dangerous against Burnley even though he missed a sitter and he has contributed more than Willian, yet we’re sticking for the Brazilian based on 1 and a half good games. Don’t get me started on Martinelli…

Today we managed to do what we needed, but the football we played was far from convincing. If we are going with the stigma that “it’s the result that matters in the end”, then I’ll put it like this. If we don’t win the Europa League Arteta should be fired, because our league position is not good enough.

I will take all the criticism that I’m too negative, but while I keep seeing us giving away goals for free in an identical fashion game after game, I’ll stick to my point – you can escape with one bad performance if you get the result, but in the long run, how you play will eventually catch up to the reality and our league position speaks volumes of that.

Will we try to do something about it against Spurs? I’m not sure. You never know with this Arsenal what will happen, bar the fact that our defending will be ropey. This seems to be a constant!