Arsenal will take on Tottenham in the NLD today with each side looking to earn the bragging rights over the other.

Both sides have had an inconsistent season and they are struggling to end the campaign inside the top four at the moment.

Spurs have returned to form in recent games and have the likes of Harry Kane, Gareth Bale and Son Heung-min scoring for them regularly.

Arsenal has also won their recent games with Mikel Arteta’s team having a leg in the quarterfinals of the Europa League already.

Jose Mourinho won the first NLD of the season with his team earning a 2-0 win thanks to goals from Son and Kane.

This NLD will be one of the most important games of the season, as there are only a few games left to be played and both teams need the points.

Whoscored has named the combined starting XI of both teams ahead of the match later today and just two Arsenal players make the cut.

Spurs have understandably had a better season, as they are in the final of the Carabao Cup and are also closer to the top four.

Bukayo Saka and Gabriel Magalhaes are the only two Arsenal players who are part of the 11.

The Brazilian has had a brilliant first season at the club while Saka has remained the key man for the Gunners. 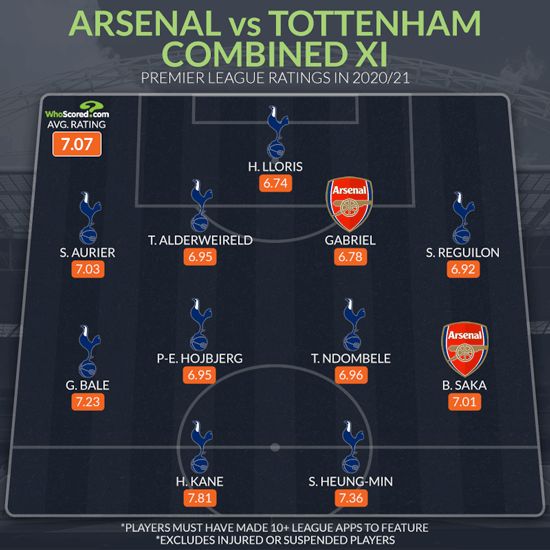