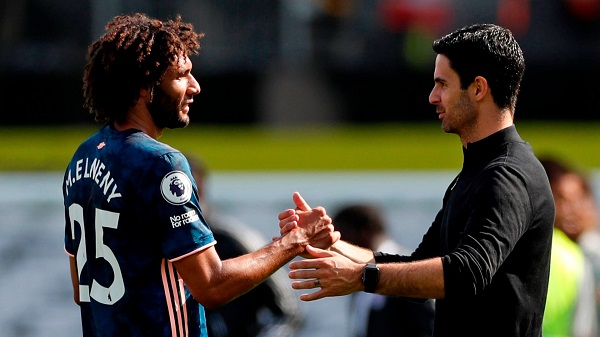 Opinion: Elneny has given Mikel Arteta something to think about

Mohamed Elneny started his first league game for Arsenal since early 2019 and the Egyptian is thankful to Mikel Arteta for giving him another chance to play for the Gunners.

He was declared surplus to requirements at the Emirates by Unai Emery last season and the Spanish manager sent him out on loan to Besiktas.

He was in fine form for the Turkish side and they were keen to retain him, but for their financial struggles.

He is also being targeted by other top Turkish teams and he was expected to make another loan move away from the Emirates.

However, he has now started Arsenal’s last two competitive games and did well for himself.

He was in the team as the Gunners played against Liverpool in the Community Shield and he was also fielded in the Premier League opener against Fulham.

He was in fine form in both games and he seems to have something that Arteta needs from his midfielders.

The Gunners have been linked with a move for a top midfielder like Thomas Partey in this transfer window.

However, they have a small summer transfer budget, I wonder if Elneny can eventually help the Gunners save the transfer fee for a top midfielder.

Personally, if Elneny continues to play well then it makes sense for Arsenal to save the money as there is no guarantee that the likes of Partey would do any better in the Premier League.

Arsenal made Elneny transfer decision because of this reason
8 September 2021, 22:30