Opinion – Ozil blamed, but the only greedy party in this situation is Arsenal

I have long said that I don’t think that Stan Kroenke has the ambition to take Arsenal back to our previous levels. As long as he’s in charge we will never win the Premiership, evidenced by the fact we have never been so far away from our previous levels.

My not rating his ability to run a football club though, doesn’t mean I don’t respect him as a businessman. Yes, lots of millionaires inherit wealth from family or their spouse, but it also takes work ethic and a brain. Our owner didn’t achieve what he has done without being smart and ruthless when he needs to be.

Whether it’s the media, shareholders, customers, etc, you need to know how to work the system.

What the American has done for years is to pay some of the very best to be his shield and provide a positive spin on issues, change the narrative, and put focus elsewhere.

For a couple of years now Mesut Ozil has been an example of that. Take the emotion out of things and the situation is as simple as a Billionaire made a deal which he regrets.

In any company you make bad deals, that’s natural, you’re not going to get everything right.

Instead of just writing off the money though, the American has had a paddy and clearly ordered the club to do whatever needs to be done, to recoup as much of the 350,000 pound a week salary back.

In the past year he has lied to his own squad, made 55 staff redundant, took out a loan that the government never intended for a football club, and continues to make it a priority to slash our wage bill.

Even as I write this, there are some who fail to question why this January is being spent cost cutting, and not improving one of worst squads in decades.

All this in the same 12-month span where Silent Stan’s net worth increased by approx. 320 million, and he opened the LA Rams new stadium, the most expensive in the world at 5.5 BILLION DOLLARS!

So, to get his customers to think a player is the greedy one at the club is a PR master stroke.

It’s not often an employer can sack people, make salary cuts, while making millions himself, and yet have some call the employee greedy. 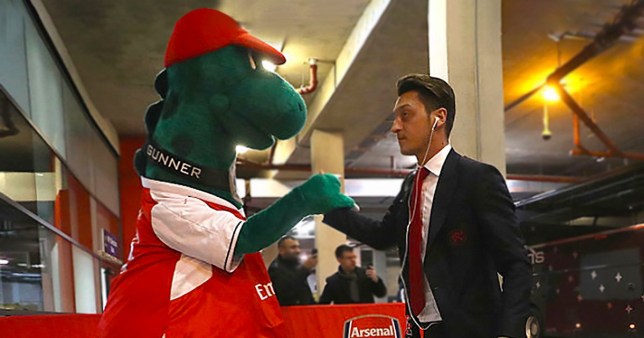 All Ozil and his agent have ever claimed is their intention to honour an agreement which was Arsenal’s proposal. That’s an example of loyalty.

Instead of that being respected Arsenal have tried every underhand trick in the book to save what is pocket monkey to the Kroenke Family.

Mesut Ozil has now told the media in Turkey he is moving to Fenerbahçe with reports in England saying he’s said goodbye to his teammates.

Despite playing a major role in ending the clubs trophy drought, the player leaves with opinion divided among our fan base.

Some call Ozil disloyal for wanting to honour his contract, which is actually an example of loyalty, and something others have been hated on for not doing.

Others feel he’s been greedy to collect 350,000 pound a week even though he hasn’t kicked a ball since March. You would think by some comments that everyone else in our squad, equally underachieving, are on minimum wage.

The perception of greed won’t be helped by the fact that Arsenal are paying him 5 million to rip up his contract. That’s before you even consider what Fenerbahce will be offering him.
But again, what a brilliant PR Spin.

All I care about is; why, having made the decision since the first lockdown that he would be frozen out, do we still have no one better?

Having watched since August, an obvious lack of creativity, why was a player not organised to arrive the moment this transfer window opened?

Why are fans not questioning why the wages you are saving with Ozil, Saliba and Kolasinac not being reinvested? Where is that money going? Instead, one more time, Ozil is portrayed as the greedy one.

Arsenal are again portrayed as this little poor club who have been exploited by a selfish player and immoral advisor because they are having to pay him to leave.

In reality the only greedy party in this situation is……. Arsenal.

Ozil’s ‘pay off’ is in fact less than the money he’s entitled to.

If he wanted, he’s legally entitled to remain in North London till the summer and Arsenal would have to pay him what would amount to approx. 8 million. So Ozil is in fact helping us save 3 million. Yet he’s the greedy one?

Arsenal have done all of this, made such a song and dance to save themselves ……. 3 million?

We have been without our only creative asset for 9 months just so we could save 3 million. 3 million which will now just sit in the bank. Is that the price to jeopardize our reputation for?

If you’re angry with the Ozil camp, then you have been manipulated.

If your boss gave you a pay rise, regretted it, paid you to sit at home, leaked out information about your lawyer, says the only way they can cancel your contract is by paying you a huge sum, would you say to your Billionaire boss, ‘nah, you keep it’?

Does that make you greedy? When was asking for money you are owed being greedy?

Do you think Arsenal would do that for me or you? They see that 60,000 people are willing to pay expensive prices to get into the Emirates. Are they immoral for never saying, ‘this week let’s make the tickets only 5 pounds.’?

Maybe they should turn around and say; ‘TV companies are paying over the odds; we will take only half of what they are offering’.

Sport is a business. The priority is to make as much money as possible but that works both ways.
If Ozil is ‘greedy for asking for 5 million to leave’, then Arsenal are just as bad asking me 60 pounds for a shirt?

Arsenal had a choice.

They could have respected the player’s wishes and got the best out of that resource till the summer. Instead, we paid him to sit at home even though we knew we had no one better. We have had zero plan B on the bench for months. It has led to our worst finish in 25 years and our worst start in longer.

We are boring to watch.

But it’s okay …… we have saved 3 million! 3 million to give to a Billionaire while the team struggles.

And Ozil is the greedy one?

Be Kind in the Comments
Dan