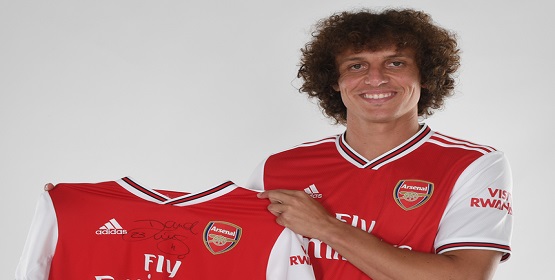 Arsenal suffered their first financial loss in 17 years when they reported a deficit of £27.1 million for the financial year ended May 31, 2019.

The Gunners have also asked their players to take wage cuts in their bid to save some money and cushion the economic effects of the coronavirus.

However, before the coronavirus outbreak and the financial reports were published, the Gunners signed David Luiz from Chelsea as they looked to add to their defence.

The Brazilian hasn’t made the team better, but he has definitely become richer and he has also made those who worked to make the move happen richer.

A new report claims that apart from the £8 milion fee the Gunners paid to the Blues, they also paid £6 million to agents who made the deal happen, before giving him a contract worth £10 million for just a season.

The Gunners would have spent a whopping £24 million on the former Benfica man at the end of his contract this summer.

As an Arsenal fan, I cannot help but wonder the wisdom in spending that much on a 33-year-old that was already surplus to requirements at Stamford Bridge.

It just shows how the club has been mishandling funds and throwing money around, considering that they signed William Saliba for £27 million and never brought him in to help a defence that needed help.

It is clear to me that our current financial struggles are mostly self-inflicted considering how we have been spending our money.

This Luiz idiocy is just the latest in a massively long line of utterly incomprehensible financial decisions. If we ever needed confirmation that we are one of the worst run clubs, this is surely it.