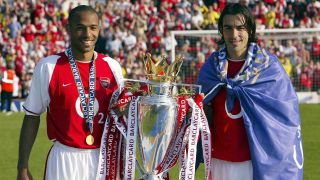 Opinion – Will we ever get our Arsenal back?

Will The Arsenal Ever Be Back? by Goonerboy

Hello lovely Arsenal family. It was refreshing to see the team win convincingly even though it was against an inferior team but it was a nice confidence boost for us and there are now 6 goals to choose from for the Goal of the Month award, lol.

On a serious note, after reading Arteta’s interview after the game against Chelsea, I was asked myself if we are ever going to get “our Arsenal” back. Here is what Arteta said; “I think [fans] tried to support the team very much and I know they are disappointed when you lose at home, there has to be some reaction, but this is a project that is going to take some time,”

“You can see and tell from the recruitment that we’ve done and the really young squad that we have at the moment that it cannot happen overnight.

“We all want to make it as quick as possible and we know that the responsibility for us it to fight with the top teams in every competition and that’s not going to change, and I think we really need them and this group of players really needs them and the club needs them now next to us because we need that confidence, that support and that energy.”

I found myself exclaiming “Again”?! as I read this. Why must this fanbase always suffer this way? Why do we ALWAYS have to be patient? When are we actually going to be competitive? I do not have the answers to these questions.

I believe all Arsenal fans are familiar with the statement above and we have been there before, we went this route under a peak Arsene Wenger, when the league was not as tough as this and we failed, how on earth are we going to be successful with this “young player” project in this ever-competitive league under an inexperienced manager?

“You can’t win with kids” was the most commonly used statement when pundits analysed Arsenal in those years, we were soft, easily bullied and therefore trophyless, I am surprised we are trying to go that route again. We moved to the Emirates to compete, but how many seasons have we really competed, how many world class players have we signed, how many European finals have we reached or won? Now we want to start another “young players” project? When are we going to end our projects? I am not sorry to say this, Arsenal are fast becoming AC Milan, I look at this team and all I see is mid-table.

Under this ownership, Arsenal are going nowhere! We would never compete, there is no need to sugar-coat this. Imagine you were a rival fan and your team is going to play this Arsenal team, is there any player you would be scared to face? I just laugh when the manager is blamed for everything, right now, our problem is a combination of the manager and the ownership, we are a shambles, a joke of a club!

People say we have spent the most money this summer, but the other teams we are supposed to be competing with also improved their teams further, the gap is ever widening.

We are gradually getting used to mediocrity and it is not our fault, I still see people saying we should keep Nketiah, keep Bellerin and the likes, these same people would come and blame the manager when we don’t do well. A club like Chelsea sold Abraham to get Lukaku and are about to sell Zouma to get Kounde, at Arsenal Abraham and Zuoma would be hyped to lofty heights yet we want to compete – well, we compete to stay in the league.

A rookie manager + no money is going to be a disaster in my opinion, I do not mean to be negative but the truth has to be said, Arsenal are moving in circles and the sooner the fans unite to stop this, the better for this football club.

Check your expectations and lower them so you won’t be blaming Arteta (or any manager for that matter) when a midfield of Fabinho-Henderson-Thiago “destroys” Xhaka-Partey-Odegaard midfield. Expecting this team to do better than Leicester, United, City, Chelsea, Liverpool and Tottenham (even with a better manager than Arteta) is setting yourself up for a massive disappointment. We all thought this summer would be a defining one, but I think it truly starts next season when we get rid of more players.

I support Arteta and want him to succeed but without crazy money, there is absolutely nothing he can do!

Lastly, this is why David Luiz left Arsenal; “Both of us decided to split. I came for two years and the aim was to win something, which I did, the FA Cup and Community Shield. Now, I think the club has a different project for the long term. They have different ideas. My idea is to win, win, win as soon as possible” explained the Brazilian about his split with Arsenal.

Ladies and gentlemen, we are back to where we started, we have a long long way to go! #kroenkemustgo