Opinion: You may not love him but losing Xhaka would be a blow to Arsenal

Granit Xhaka has been linked with a move away from Arsenal with AS Roma emerging as serious contenders for the Swiss midfielder’s signature.

The former Borussia Monchengladbach man has had a mixed time at Arsenal, but one cannot argue that he is an influential part of the squad.

This is one reason he was considered for their captaincy in the 2019/2020 season.

He remains one of Mikel Arteta’s most trusted men and showed that there is much more to his game when he filled in as a left-back in some games last season.

The midfielder is targeted by Jose Mourinho because the AS Roma manager has watched him in England and knows how good he is.

I have to admit that Xhaka can be a frustrating player to watch, especially when he is in the mood to take no risks and would play just simple passes instead.

However, when he puts in a good shift, we all feel his impact and this is a testament to his abilities as a player.

We could get a better player in the market if we sell Xhaka, but we’ve just lost David Luiz and losing two influential players in the same summer would be an enormous blow to the team.

Xhaka might not be the perfect player for us, but we would be mistaken to think we can allow him to leave and not face any consequences. 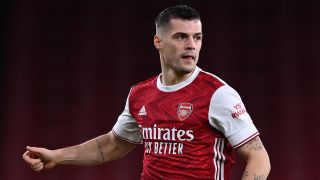