Garth Crooks has described Arsenal as an ‘ordinary team’ whilst naming his Premier League Team of the Week.

Arsenal were thoroughly impressive this weekend in dispatching of Leeds United by the 4-1 scoreline, with a number of performances worth shouting about.

None more-so than Bukayo Saka according to BBC pundit Crooks, who also named Gabriel Martinelli in his XI for the week.

“Brilliant against West Ham and even better against Leeds and the difference between the two teams in both matches” as well claiming he is “the best thing I’ve seen since I saw Arsenal’s David Rocastle burst onto the scene at Highbury”.

“He is the most consistent Arsenal player at the club and has been for the last season and a half – and the reason Arsenal find themselves flying high.” Crooks continued on the England international.

“I can’t understand how such an ordinary team keeps getting these results. It’s unbearable.”

While you can agree with his comments on both Martinelli and Saka, it is a little harsh to call us ‘ordinary’. We appear to have a number of strong options in each role in the team at present, and the results are a by-product of ability and mentality, which we now have in abundance.

He did spend five years at Tottenham which could explain the shots sent our way, but maybe he should compare our team area by area in comparison to them before calling us ordinary… 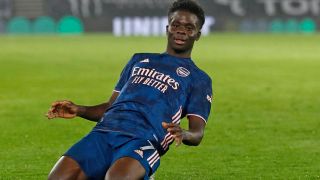 Pundit claims Arsenal is performing below their capacity despite beating Southampton
13 December 2021, 18:30