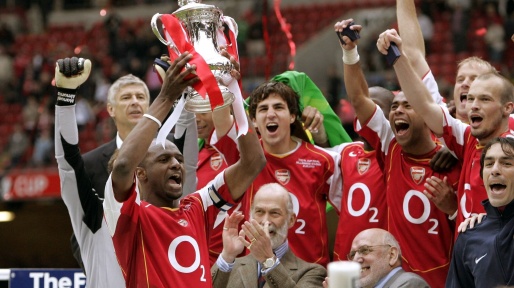 Other legends that deserve an Arsenal Statue #1 – Patrick Vieira

WHO ELSE DESERVES THE IMMORTAL STATUE AROUND THE EMIRATES? by Ken1945

We know that Arsene Wenger is about to become the next “Immortal” as defined by their own statue, and quite rightly too.

In reverence to a PAL of mine, I will cover his unveiling at the start of the next season, whenever that will be.

However, I then began thinking about who else, in my opinion, deserves that honour and one man came to mind immediately.

PATRICK VIEIRA took over from Tony Adams captaincy as effortlessly as a hot knife through butter!!

His aggression as a perfect box to box midfielder saw some memorable clashes with Roy Keane, as The Arsenal and Manchester United battled out for supremacy in the early 2000’s.

During the nine years he served the club with outstanding performances, he lifted three league titles and three FA cups.

He was such an important part of the Invincibles team and was in the two double teams of 1997 and 2002 – but his combative play saw him receive 103 yellow cards and 9 red cards.

in France, where he played in the FIFA World Cup final winning team of 1998 and the winning side in the Euro 2000 competition, he also won 107 senior caps and scored 6 goals.

I just loved Vieira’s competitive manner, his total commitment to the cause, his refusal to be beaten, his leadership skills and his body language with opponents’ supporters.

The way he ensured the team celebrated the Wembley FA cup penalty shoot-out against United at the end where their supporters stood, and the way he waved away the Spud supporters when he scored the opening goal the day we won the league at the Sh****le, as if dismissing an irrelevance…which of course they were!!!!

Patrick Vieira is the person I would nominate for the next statue, some might agree, and some might not.

What other player or manager would other Gooners see as a potential candidate?