Ozil is made out to be the villain yet again – what about Kroenke?

In Ozil I trust by Dan Smith

Even without a ball being kicked yet again the media picks on Ozil. The majority of the squad are doing a decent thing voluntarily, yet we focus on the German’s decision not to agree to losing 12 percent of his income. Two others agree with him but of course it is the midfielder who makes the headlines

So, for weeks, Premiership club’s players were criticised for not taking a wage cut. Even captains setting up their own initiative to help the NHS was not good enough.

As Wayne Rooney pointed out, that’s why owners and the League itself has been happy to leak this out to the public, essentially backing footballers into a corner. Chairmen cannot legally slash salaries , that needs to be the individual’s choice. They know that the average man and women in the street will find their wages even more crazy when the world’s in lock down, pressuring these men if they dare say no.

It hurts the sports image if someone on 100 grand a week cannot take a pay cut while many of their fans are losing jobs or do not know when or if they return to work, etc. Yet is Ozil wrong in his stance?

Put emotion into it and of course the world is crazy that a man gets 300,000 grand a week for kicking a ball, while ordinary people are starving and/or homeless. Yet that is a different debate, one that is being going on for decades. 2 per cent of the richest individuals in this universe have enough to stop poverty so let us not act like things should change due to the Pandemic.

In other sports, genres, etc, I read ‘how dare there be rich people’, like they have done something evil, likes it is their fault that others are in their individual situations. The sense of entitlement scares me, it is like you are not happy so will not be unless someone else loses everything. The economy takes a hit, so how dare others still be wealthy?

Some, by the way, work very hard for their millions, others have bad luck. That is the way the ball bounces.

But yes, the likes of Ozil earn absurd money …. we know that… but that is not his fault. He gets that because – and this is the key thing – there is a hell of a lot of money in this game. That is what the likes of Stan Kroenke wants you to forget.

That is what Rooney means. They want us to debate what he has doing with his money, meaning we are not talking about what those who own the club are doing.

See, Ozil has not said no. Neither have the other two. They want evidence to see how much revenue is lost and what their employers are equally risking or helping?

That is not just Ozil. Bellerin, on behalf of the Arsenal squad, rejected the initial request from the club to give up a percentage of their money until they saw the shareholders, i.e. the Kroenke family, do the same. It is like those earning thousands are being told to pay the tea ladies wages because billionaires have found an excuse not to.

Peers at other clubs feel the same, hence why they are happy to set up their own initiative for the NHS – so they control where their money goes.

I cannot say Ozil is wrong because it is been my stance from the start. We all have opinions but how many truly know how contracts, insurance, etc, works?

What if the season does finish so there is no TV money to pay back?
What if FIFA turn around and offer compensation?
If that happens then the 12.5 per cent given up is simply going back into the club.
If I were a player my priority would be that all non-playing staff are paid in full and any wage cuts benefit the NHS, not a football club.

Remember Stan Kroenke is a billionaire. FIFA got 6 billion just for the last World Cup and they will get more for the next. So, an Ozil has every right to ask what other stakeholders are doing to help.

It is wrong to target him for not believing or wanting proof of this hit we might take. If it is to fund a new striker then that is not his responsibility.

In 2014 Ozil used all prize money from winning the World Cup to fund 23 surgeries in Brazil for 23 poor children. For wedding gifts, he and his wife raised enough to cover the cost of another 1,000 surgeries for children. He helped fund 100 000 takeaway meals to Turkey and Syria refugee camps through the Red Cross. He is funding a football school in Turkey and is the face of charity Rays of Sunshine.

Lots of that will not get mentioned in the press. 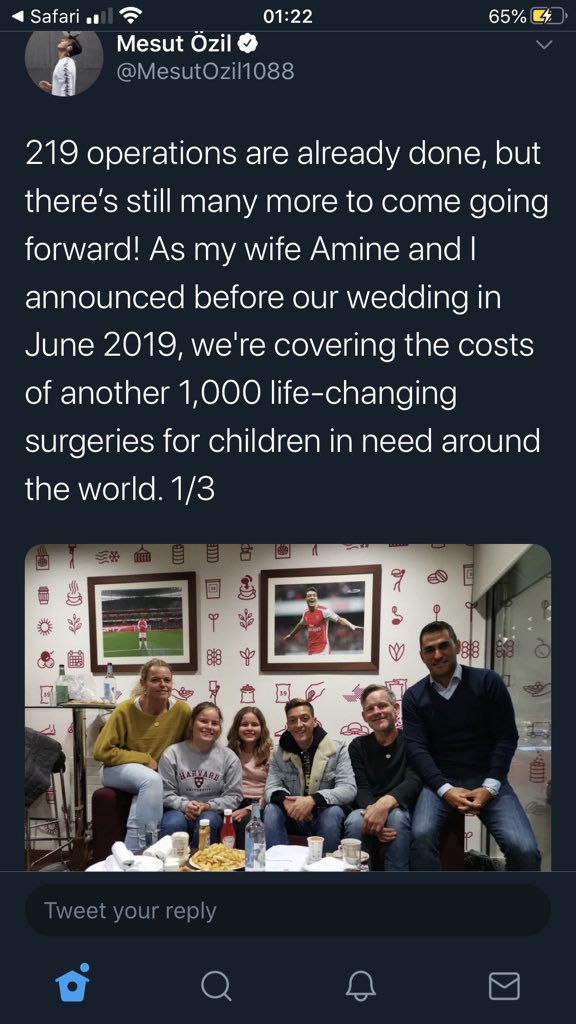 Now, just because we are in an era where we think we can tell someone he has to give 12.5 percent of his wage to Mr Kroenke, I would rather him to continue doing the good work independently, and wait to see the facts.