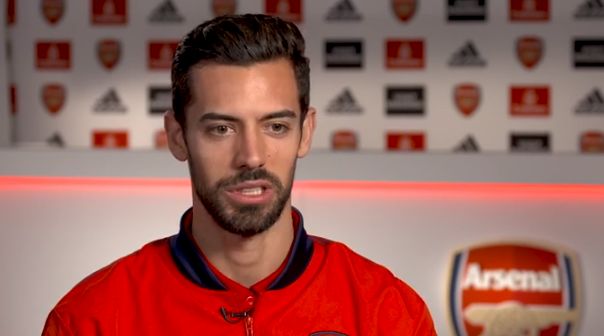 Pablo Mari has been left impressed by Gabriel Martinelli despite having not met the young Brazilian.

The new Arsenal defender joined the Gunners last month and he is scheduled to join the club in Dubai for their warm-weather training camp later this week.

He wasn’t in attendance as Arsenal played a goalless draw against Burnley before their winter break, but he has been watching the Gunners for some time now.

He was speaking about Arsenal players and claimed that he has been following the career of Martinelli and the young Brazilian has impressed him greatly.

He was full of praise for Martinelli who joined the Gunners from little-known Ituano last summer.

Martinelli has scored 10 times for Arsenal this season and their reluctance to allow him to join up with Brazil’s under23 squad for their pre-Olympic competition this month shows how important he has become to their first-team setup.

Mari said, as quoted by the Express: “He has exploded on to the scene and is showing that he’s a great player with a lot of talent,” the centre-back said.

“Obviously he’s still very young, but he’s already had a taste of playing at the top level and he’s doing very well.

“I’ll say congratulations when I meet him, but now he just needs to keep it up and work hard because he’s really talented.

“Martinelli has shown he is a bit different to any other player in terms of his ability.

“He has great vision and there’s real talent there in terms of his dribbling and his ability to choose the right play.

“His decision-making is improving all the time. Martinelli still has a lot more to show but he has incredible talent and I think gradually he’ll keep developing and become a top player.”

Mari is not the only one that has been left in awe of the teenager, he has caught the attention of the whole footballing community and long may that continue.